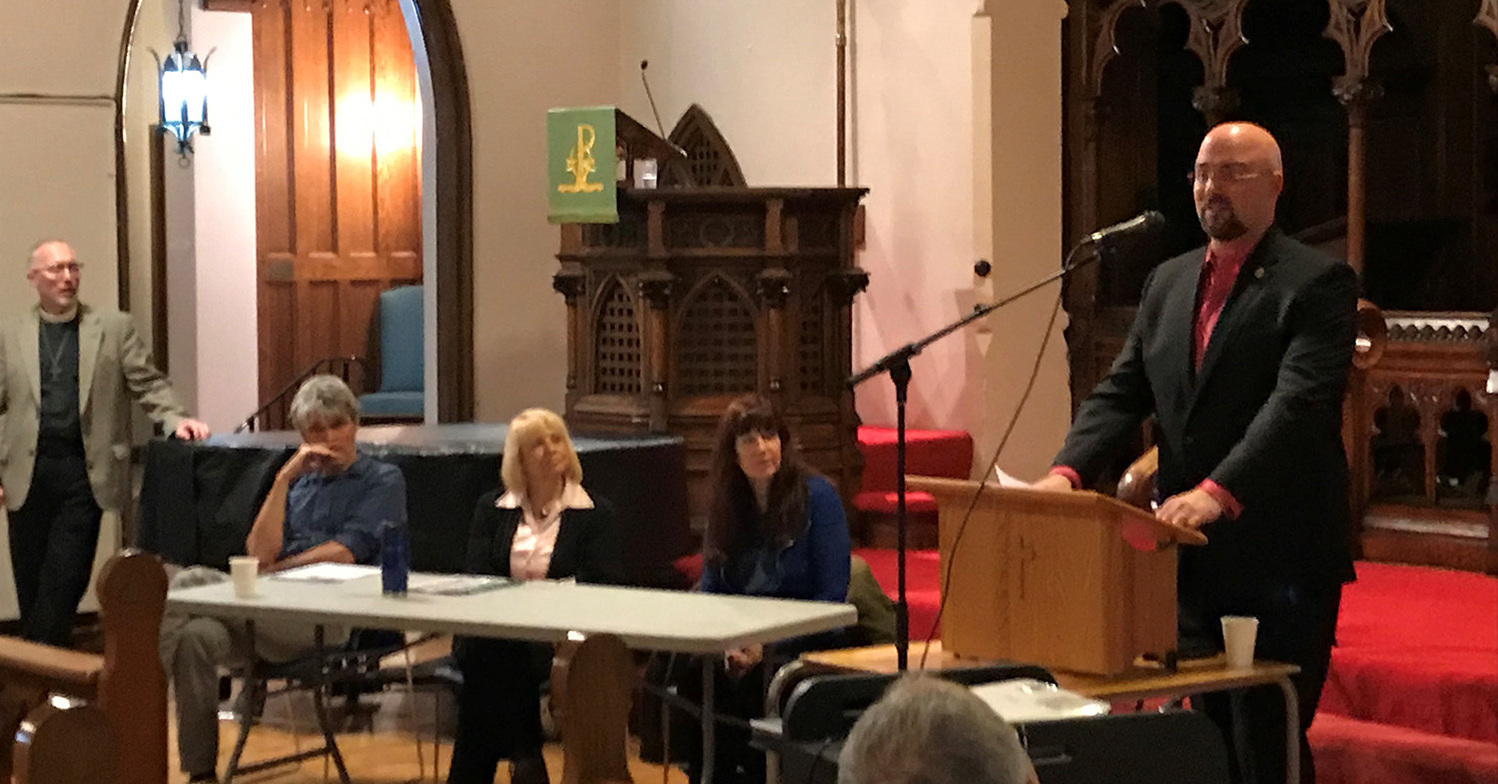 An evening panel and discussion at St. John the Evangelist revealed a dispiriting picture of poverty in London, Ontario, where one in five children live below poverty line. St. John’s Outreach Committee continues to stand for the marginalized groups in the area and plans a  panel on homelessness for May 1.

(Photo by Simon Davies: London is no longer the affluent center it once was: London’s MPP Terence Kernaghan during the discussion on February 26)

At least 125 Londoners from all over the city travelled to St. John the Evangelist Anglican Church through snow and cold on February 26 to attend a panel of three speakers addressing poverty in London.

The panelists for “What it’s like being poor in London” gathering were: Dr. Don Kerr, professor of sociology at King’s University College, Dr. Sharon Koivu, medical specialist in palliative care and substance abuse, and Elizabeth White, former manager at City of London’s Social Services.

The speakers pointed in different ways to the complexities of poverty, to the misunderstanding of London as an affluent city (it was in the past and it is not now), and to the misplacing of blame on the poor and jobless.

Dr. Kerr’s presentation dispelled the inaccuracies of current published stories of London’s unemployment rates and established a direct link between the real numbers and the existence of structural poverty in the city. Dr. Koivu talked about poverty as a social determinant of health in London, while Elizabeth White spoke about her 45-year long experience of supporting London’s poor.

A dispiriting picture of poverty in London emerged—a picture that all of us often miss. Each panelist spoke for 20 minutes. A discussion followed with questions from an open mic.

Terence Kernaghan, MPP from London North Centre, summarized the evening’s issues and urged all of us to realize that London is no longer the affluent centre it once was stating that we need to hope for and work towards a better future for our citizens.

St. John’s Outreach Committee sponsored the event. Its purpose was to make people aware of the needs in London and of how we can communicate these needs to others. In the long term, Outreach hopes these evenings will point to constructive ways to respond to these needs as well. Join us again on May 1 for “What it’s like being homeless in London.”

Cory Davies is the Outreach Chair at St. John the Evangelist’s, London. Dr. Don Kerr: “Why London’s record low unemployment rate is so misleading”.Dr. Kerr’s statistics and power point graphs immediately dispelled the inaccuracies of current published stories of London’s low unemployment rates.There is structural poverty built into our city now because of loss of industry and many other factors, says Dr. Kerr pointing out that there has been no employment growth to match the city’s population growth since 2002. London stands second from the bottom of rankings of Ontario cities in its employment rate and near the top in rankings of social assistance.

Dr. Sharon Koivu: “Breaking the Silence—Poverty as a social determinant of health in London”.Dr. Koivu states that in absolute numbers, London has more overdose deaths than Toronto, and a higher percentage of deaths per capita than Vancouver. She cannot fathom how London can afford a $2,000,000.00 overpass on Adelaide Street as the City closes 21 beds at Mission Services. Dr. Koivu refers to a recent study in Hamilton which found a 25 year difference in life expectancy between affluent and poor neighbourhoods in the city.

Elizabeth White: “Forty-five years of supporting London’s poor”.Elizabeth, a member of St. John’s, offered the sad statistic that 1 in 5 of London’s children live in poverty, and 1 in 7 (or 4.9 million) people in Canada live in poverty. She argued “that poverty is about lack of resources” both emotional and social. Marginalized, racialized and LGBTQ groups are “hit harder by poverty.” Situational (job loss, family breakdown, health problems) and generational poverty are pervasive. Citing Bridges Out of Poverty/Circles as a positive response to poverty (one that has resulted in major savings to Ontario Works), she insisted that people should “continue to learn about poverty, rethink our stereotypes about poverty” and “invest” personally in the community to better understand its complexities.