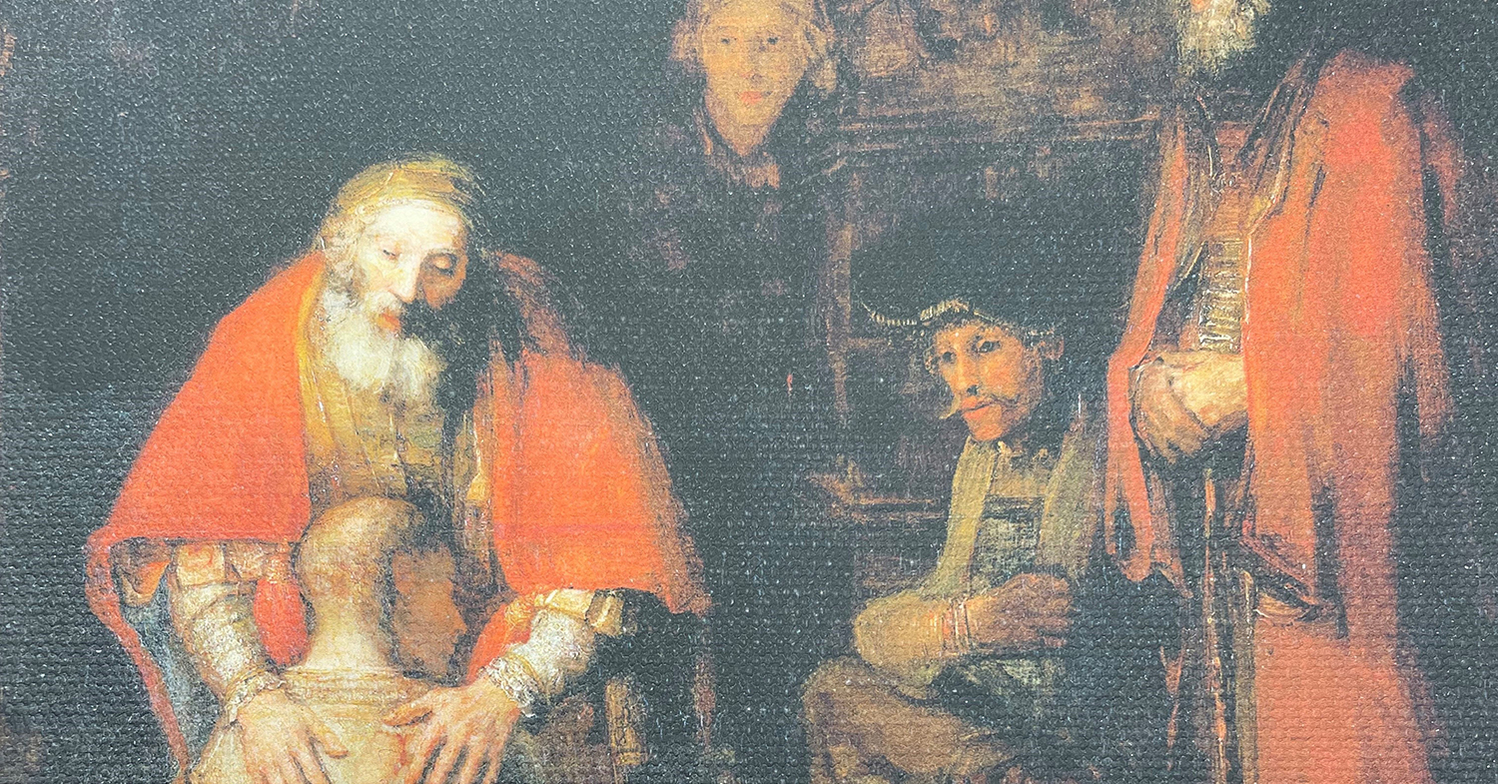 In a different time and what seems to be a different world, when the concept of travel was deemed to be both relaxing, and educational, my wife, Carolyn and I signed up for a tour of the Baltic capitals which included a visit to St. Petersburg in Russia. Staying within the bubble of the group tour seemed to be the wisest and safest course of action during the time we spent in the city that was saturated with centuries of history.

A highlight of the visit was a tour of the Hermitage. It is a museum laden with numerous treasures. One of its prize pieces is “The Return of the Prodigal Son“, by Rembrandt.

Art historian Kenneth Clark described the painting as “a picture which those who have seen the original in St. Petersburg may be forgiven for claiming as the greatest picture ever painted“. Its significant size (262 cm x 205cm, or approximately eight and a half by six and a half feet) was breathtaking. The subject was simple, yet filled with complexity of light, shadow and symbol that might have allowed for hours to pass by if it had only been possible to have that time. Yet, for me, with only a few minutes permitted to our group, to stand there and take it all in, was one of the highlights of many days of travel.

Like so many times in life that slip by with an unimaginable speed, unaided by any photographs, those moments can only be entrusted to memory. From a greater perspective, the likelihood of ever returning to Russia, even to make another trip to the Hermitage, may easily be tossed into the wastebasket of impossibility.

In my own life, a recent simple phone call began a process which has moved me, at what feels like lightning speed, from my comfortable chair, reading the newspaper, with easy access to a cup of coffee, to five days later beginning a new experience in ministry as the Interim Priest in Charge at St. George’s, Guelph.

Like so many congregations re-awakening from the impact of Covid restrictions over the last two years, creating opportunities for the simple renewal of relationships and the offering of the invitation to “come home“, has become a key factor in this ministry. It is not an invitation to return to the church community of the past, but rather an invitation to explore the future and what new ministry might look like in the years to come.

The story of the Prodigal Son follows a person leaving home of his own freewill and living a life of excess. In contrast, each day all of us gaze at images of individuals and family members who are leaving homes which have been razed to the ground as they flee for their lives to safety. An image which has been etched into my mind is a series of pictures taken of the hands of Ukrainian refugees who were asked to show what precious items they had brought with them in their escape. A woman’s hands, dirtied by the journey, held an oak leaf and an acorn. They were elements of her homeland that she would carry with her and treasure, wherever the future would take her.

If your life changed in a moment, and in an instant you had to make choices about what you would physically carry with you and what you would leave behind, what would your choices be? The choice is yours and yours alone. Would you choose to burden yourself with the heavy baggage you have accumulated over time, or escape carrying your precious treasures as memories as you journey into the unknown?

For people of faith, no matter what our circumstances may be, our common claim is that our pilgrimage through life is not taken in isolation. The burdens of life are not ours to carry alone.

God enters our lives through the people whose lives intersect with ours. God enters our lives when we discover those places where our lives are enhanced, not only by a sense of community, but also where we are nurtured by Word and Sacrament. God enters our lives in ways which may surprise us but who is always ready to hold us closely us when, like the Prodigal Son, we choose to make a transition in our lives and return home to experience that embrace filled with forgiveness and Divine Love.

Rev. Canon Christopher Pratt had retired from full time ministry, but has been called to serve as the Interim Priest at St. George’s, Guelph in the Diocese of Niagara where the Sunday services are streamed on the St. George’s Guelph Youtube Channel. You are invited to tune in.
chrispratt@diohuron.org