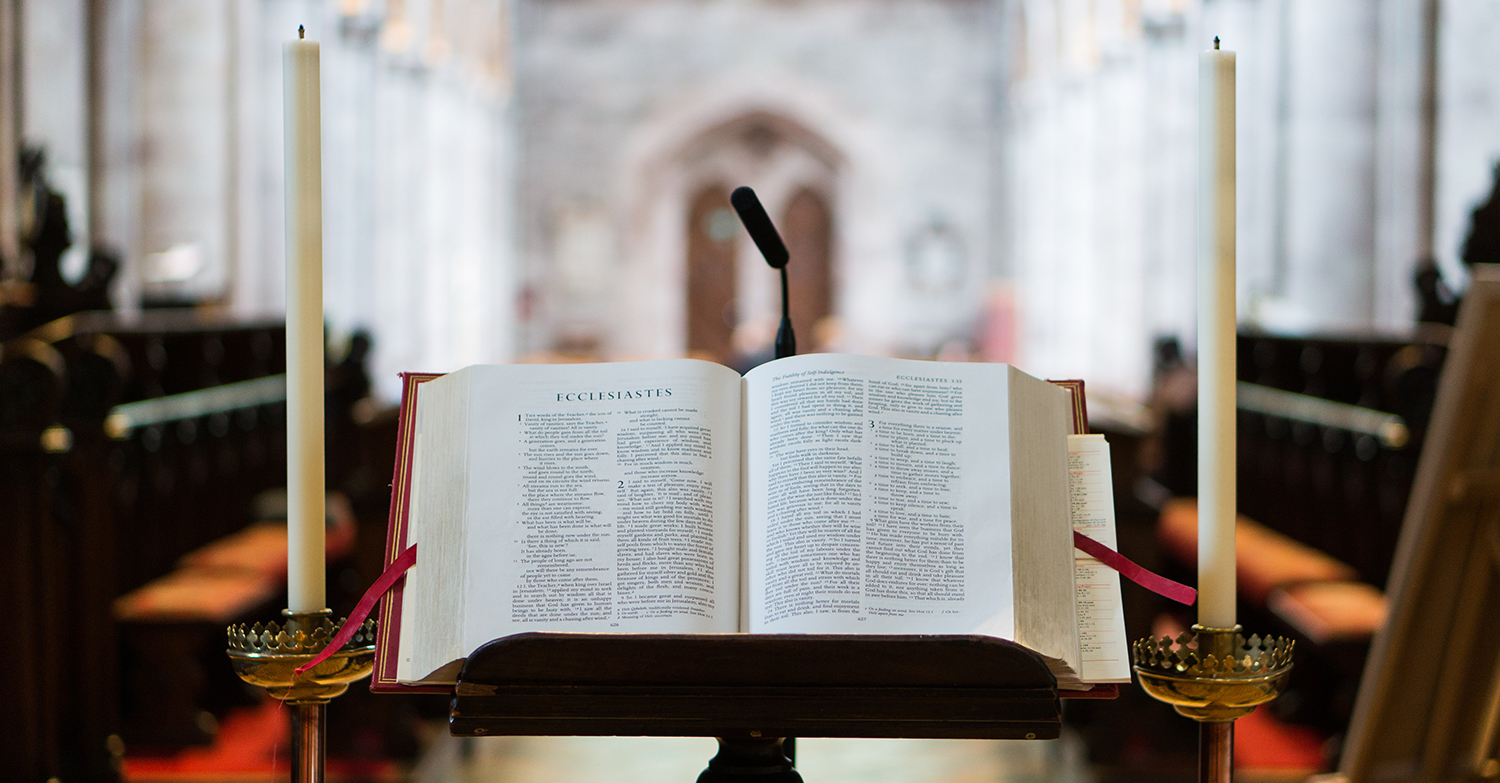 The task of a sound system is to take sound which is present at a microphone or from a previously recorded source and which is turned into a  small electrical signal, to then control and amplify that electrical signal to the point of having enough power to drive loudspeakers which hopefully produce an accurate copy of the original sound and are designed and installed in such a way that the sound only minimally excites the acoustics of the building.

Since this is a system, every element of the system affects the final sound. If you study the diagram, hopefully, the connections for any system should make sense: 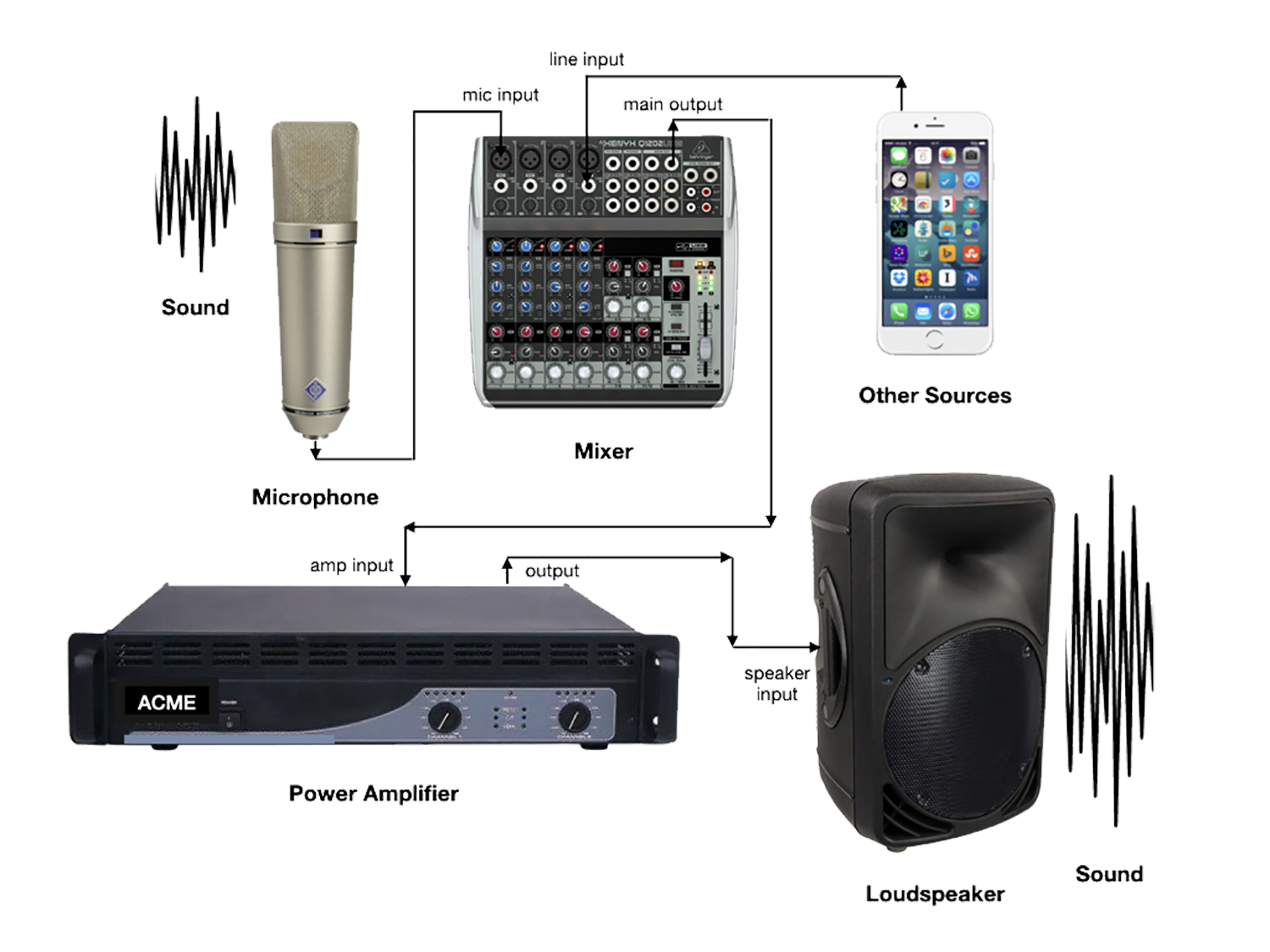 There are a number of ‘voltage levels’ in a system.

The output from microphones is a tiny voltage on the order of 1/1000 or 2/1000 of a volt (we call this millivolts), this is referred to as microphone level. The first stage of circuits in the mixer for each channel amplifies those tiny voltages by a factor of 1000 bringing them up to 1 to 2 volts, which is called line level. The mixer also performs other functions such as sophisticated tone controls and allows us to combine the signals from multiple inputs, but the final output from a mixer is still at line level.

Each channel on a mixer usually has more than one type of input called ‘mic’ and another called ‘line’. This allows us to plug in signal sources from other equipment such as wireless microphone receivers, the output of smartphones and other equipment.

Since these sources are at the higher line level, they bypass the amplification needed for the microphone inputs. Your choice for any channel is either a mic or a line-level input, but not at the same time. Many smaller mixers have a couple of channels that are for line-level inputs only and may feature channels that accept both right and left inputs from stereo sources.

The mixer output is now connected to the input of the power amplifier. The job of the amplifier is to take the line level signal and create an electrical signal which has both the voltage and current necessary to drive the loudspeakers.

Electrically the product of multiplying voltage times a current gives us watts of output power.

The power output of an audio amplifier is by no means an indicator of quality, as some salespeople would like to convince you. Unfortunately, many of the advertised power ratings of amplifiers are falsely overrated.

The actual power required depends on the design of the speakers that are being used and the intended loudness of the system. Speakers, as we will see in a future article, vary wildly in the amount of sound that they produce for any given wattage.

The output of the amplifier is connected to the speakers, which have the complex task of reproducing the original sound with as much fidelity as possible.

Sometimes two or more functions are combined in the same enclosure. Older systems may have what is called a package system, with limited mic and line inputs, which combine the mixer and amplifier sections. There are similar products which are essentially the same idea but in a rugged case and more mic channels that are aimed at the semi-professional music market. These are manufactured by the same companies that produce guitar amplifiers.

Additionally, sometimes the power amplifier and speaker are combined. These are called powered speakers. In some cases, these powered speakers also contain microphone and line inputs, therefore, being a total system.

The choice of equipment is therefore a fairly complex network of tradeoffs, usage and installation considerations, and varying price levels. In upcoming articles, we will look at all of the separate components of church sound systems making it easier to understand the choices we need to make for any situation.

Stay tuned, together we can make sure that the ‘Word is heard.’

RELATED: I CAN'T HEAR THE PREACHER

Rev. Paul Woolley is a retired priest in Huron. He has 55 years of experience working with audio equipment of every description for varied venues.