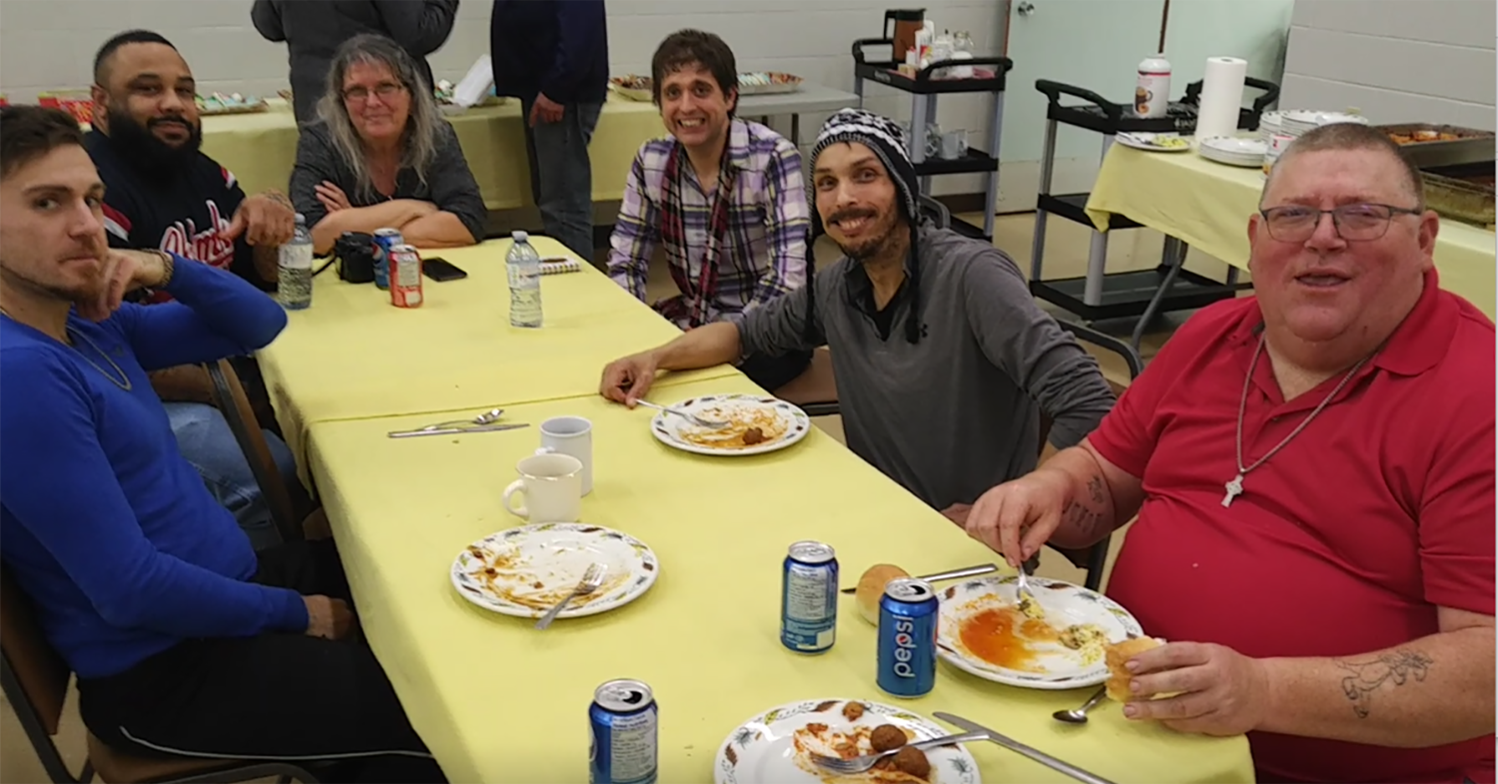 No doubt you have heard the Beatitudes, but have you ever experienced them? You would have just before Christmas when St. John the Evangelist, Leamington hosted a dinner for the homeless and the ostracized. I think we experienced all that Jesus proclaimed in that passage that particular Sunday.

You know that homelessness is an issue, as is mental health and addiction. Sometimes these are a trifecta of challenges.

My friend Kathy Edwards asked if she could put on a dinner in our church hall, to give a place for those who live at Leamington Manor, a place for those who struggle with these issues. She wanted to give them a proper Christmas dinner. My answer: of course! And can we invite in the homeless? Certainly!

And so Street Feast was born, that easily, barely two weeks before Christmas.

I quickly learned that marginalization has levels – there is not a single large group of have-nots but many layers. Those who I see at our weekly meal, which is organized by Deacon Deborah Wilson-Safa, were not the people I saw that Sunday. To quote Kathy, “These people are afraid, they don’t like to go out because people treat them badly.”

What did I experience?

A young woman baptized at this very church, thankful to be back, thankful to have a warm inviting place with a fabulous meal. An aesthetician who “once had it all,” and who lost everything and struggles with many issues including a record. A middle-aged man and his two adult children who slept in tents since August 10 at a campground for $1400 per month until it closed, and then where they could as they were ‘moved along’ numerous times. Why were they homeless? To protect their mother who was schizophrenic and needed support, their comfort and security was sacrificed for hers. He eventually lost his job due to the stress of his homelessness. A 21-year-old woman who as a teen was homeless for seven months because her stepmother missed rent. A man who was turned away over and over at the hospital because of his address, because he was, “obviously seeking drugs.” A simple blood test found a rare form of leukemia…

These are the stories of God’s children, and as much as they admit mistakes, they all felt victimized and picked-on. All spoke of the need for community, especially the wider community as people would have at one time cared about them and others needing help. The lodge is a refuge for those who need help. The church is also a refuge, we offered the hospitality of Christ and an ear.

I share these moments with their full permission as I recorded these conversations with the hopes of editing them for our website. These people with drug, alcohol and mental health issues were all thoughtful and well spoken. All were once whole, and now live in supportive housing for $55 per day.

The Lodge tries to help people who can be high need. You may know some of their habits that can make us uncomfortable: people who hoard, who smoke too much, who stay too long at Timmies, who have visible signs of drug use, who tell strange stories, who sometimes pilfer but who are more often pilfered from. These people are often preyed upon and victimized. These are people who know what is wrong and who are trapped in it.

These are the people loved by God and who Kathy and her staff love and try to help. She wanted a “normal” Christmas for them – with live music and more than enough food.

Being mindful, I checked in with the OPP – they were thrilled that this was happening because this was needed, and area businesses put up the poster and alerted all their members should they like to help. What Kathy was willing to provide out of pocket became donations when she called suppliers to place orders. Hats and scarves and coats appeared. God provides, and there was only happiness! We wanted to offer love and love was felt. Time and time again, we are able to use our central space to offer the light of Christ to people in need. Whatever is needed over-and-above space is provided by God as an answer to prayer. Community formed with around forty coming for dinner.

In a different situation these may be people to be avoided, perhaps even feared, and yet they live in fear and pain. They are indeed the ones who Jesus blessed as those who mourn, who are hungry, who thirst for righteousness, the people that Jesus will be found among.

Yes, these are people that can be difficult and needy, whose lives are troubled and often ignored. Pope Francis said pastors must be, “shepherds living with the smell of the sheep.” (March 8, 2013.) We are called to serve; we are called to the edges of community. This is not sermon fodder but the facts of Christian identity. These are children of God whose parents fear for their safety and who wonder if they will ever be happy. We do too. Peace on earth and good will to all.

Rev. Andrew Wilson is the rector at St. John the Evangelist, Leamington.