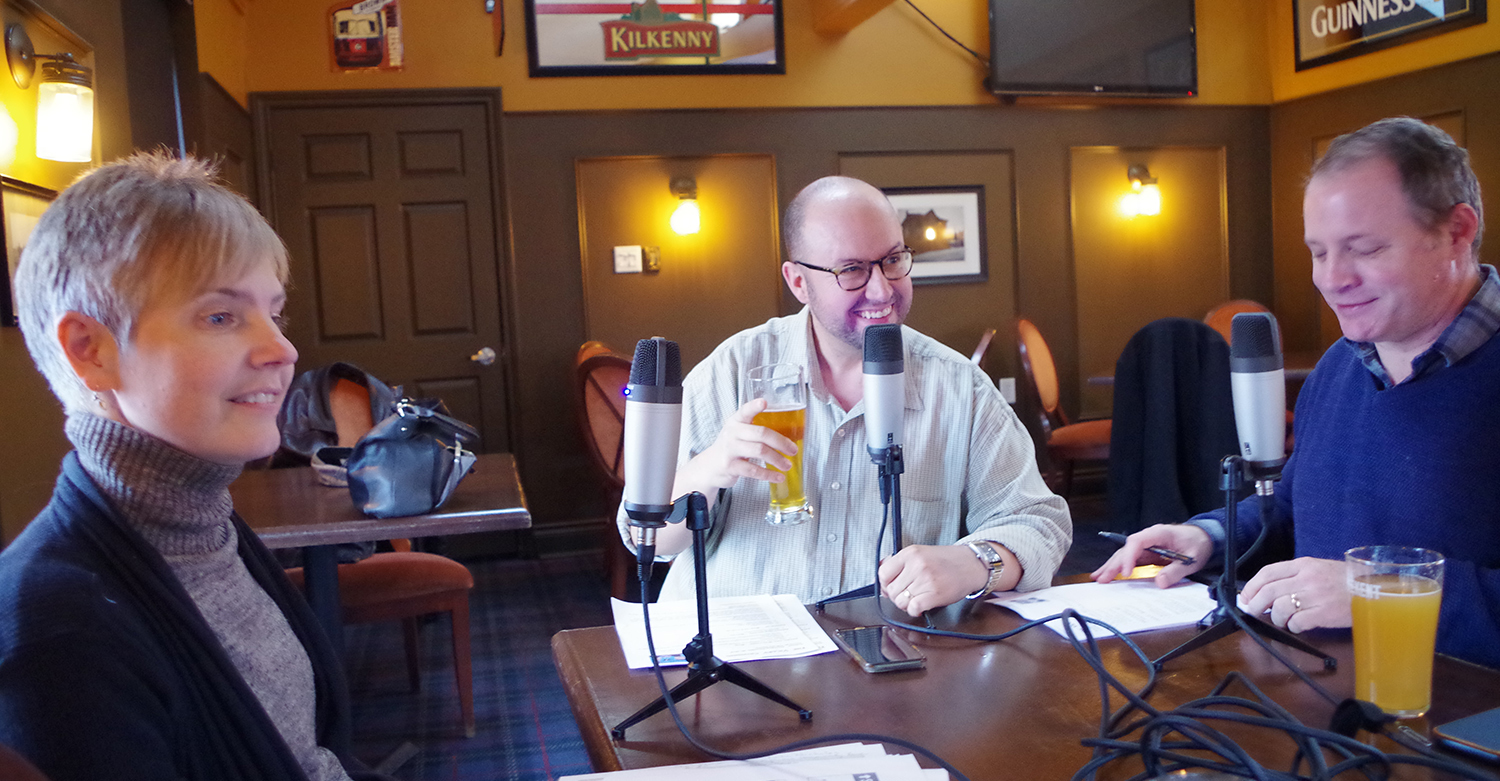 In October last year, a new podcast re-examining the role of faith and the place of church in our society was launched in London from an unlikely place. Rev. Canon Kevin George, rector of St. Aiden’s, and Rev. Rob Henderson, rector of the Parish of Holy Trinity-St. Stephen’s Memorial, discuss the ways faith intersects with the public square streaming from the top floor of a local pub.

The podcast streams under the name The Vicars’ Crossing. It has a good branding which spreads across different media platforms. All of them indicate that the idea of two priests having an interesting conversation about faith over a pitcher has its followers.

So how did it come about?

“In the fall, I was moved to pray about the possibility of a podcast as a way of reaching out to the community beyond the walls of our church”, recalls Rev. Canon Kevin George. Convinced that it takes more than one person to make the program interesting, Kevin started looking for a cohost.

“It was well-timed that my friend and colleague Rob Henderson moved to London that year. Given his past experience in radio, our good friendship, and our easy rapport, I knew he would be the ideal cohost. I was thrilled when he agreed to the idea.”

Together they considered what the focus of the podcast would be and they easily agreed on the general idea of hosting a conversation about how faith intersects with the public square.

With that in mind they contemplated where to record their podcast and the idea to do it in a pub was entartained.

Kevin then approached Stephen Rogers, manager at Crossings Pub and Eatery on Hyde Park Rd, and the deal was made.

“Stephen would write us a check to cover the cost of our recording equipment, and give us a room to meet in weekly in order to record our broadcast. They would be our primary sponsor, and we will give them that recognition on each and every podcast.”

A new partnership was forged and the podcast name was born: The Vicars’ Crossing.

For both Rob and Kevin, reaching out beyond the walls of the church implies talking with someone – so they have had a guest on every podcast apart from the introductory one.

They had conversations with Michael Higgins, best-selling author, about the work and writings of Henri Nouwen, John Moriarty and John O’Donahue. Then they welcomed Canon Greg Smith who is the Diocese of Huron’s PWRDF representative and discussed the options for people to get involved with the important work that the church is doing around the world. After the terrible and tragic events in Pittsburgh at the Tree of Life synagogue, their guest was Rabbi Debra Dressler, and they had a conversation about ways that we can come to one another’s aid in the midst of these crises.

“Each of our conversations had allowed for us to consider how we as Christians, the faithful, the baptized, might be able to get engaged in the wider community around us and effectively bring dignity and peace in this world as our baptism calls us to”, Kevin says.

And of course, style matters. Otherwise, why do it in a pub and with a pint of beer in front of the microphone?

“The conversations we have on the podcast are no different than the ones we’ve had over the years at pubs, restaurants or in the car”, explains Rev. Rob Henderson. “We tend to chat about how our lives and the lives of the people we share our ministry with are connecting to the stories within our communities.”

The recipe, as Henderson sees it, seems very simple: throw in some good natured ribbing, a bit of silliness, and a few laments about our sports teams and it’s like eavesdropping on the conversation next to you at Tim’s.

Yet, when we sneaked in to one of their podcasts, the depth of conversation with their guest – Jennepher Cahill, Director of Development at the United Way – was pretty impressive. Both Rob and Kevin were relaxed – and so was their guest – but at the same time they were extremely well prepared to discuss the issues of the day. While Rob and Kevin may be able to carry a conversation, neither of them, by their own admission, has a technical bone in their body. They needed someone who might be able to join the team and produce the podcast. So enter Iain Stevenson, a member of St. Aidan’s and a student at Central Secondary School. All the technical set up, recording, editing, and even the theme music is the work of this very skilled 17-year-old.

“We constantly remind people that this is not a product of two priests only. This is a three-way partnership”, says Kevin. “While he’s not nearly as chatty as myself or Rob, Iain is also very keen to offer his opinion from time to time on our podcast. When he does, it is always incredibly instructive and meaningful.”

The recordings are all done in after school hours to accommodate Iain’s schedule. The young man enjoys being a part of the team.

“I was given a great opportunity to not only produce something fun, but contribute my voice as well. Kevin and Rob have great ideas for new episodes, and I look forward to talking the post production of those recording sessions”, admits Iain.

If the production is cross-generational it is fair to assume that their audience may be so as well. Their Facebook page, with followers already in hundreds, confirms the assumption.

“So far the people in my parish who have listened to the podcast say it’s easy to listen to but also gets them thinking about how they can use their voice and engage with issues in the public square. That’s the best kind of feedback to get”, reports Rev. Henderson.

Obviously, the energy is there, the momentum is on the Vicars’ Crossing side. It seems that we can expect more good news from the upper room on Hyde Park Road.

You can listen to Kevin and Rob on Youtube and also on Soundcloud (https://soundcloud.com/kevin-rob-713701550)