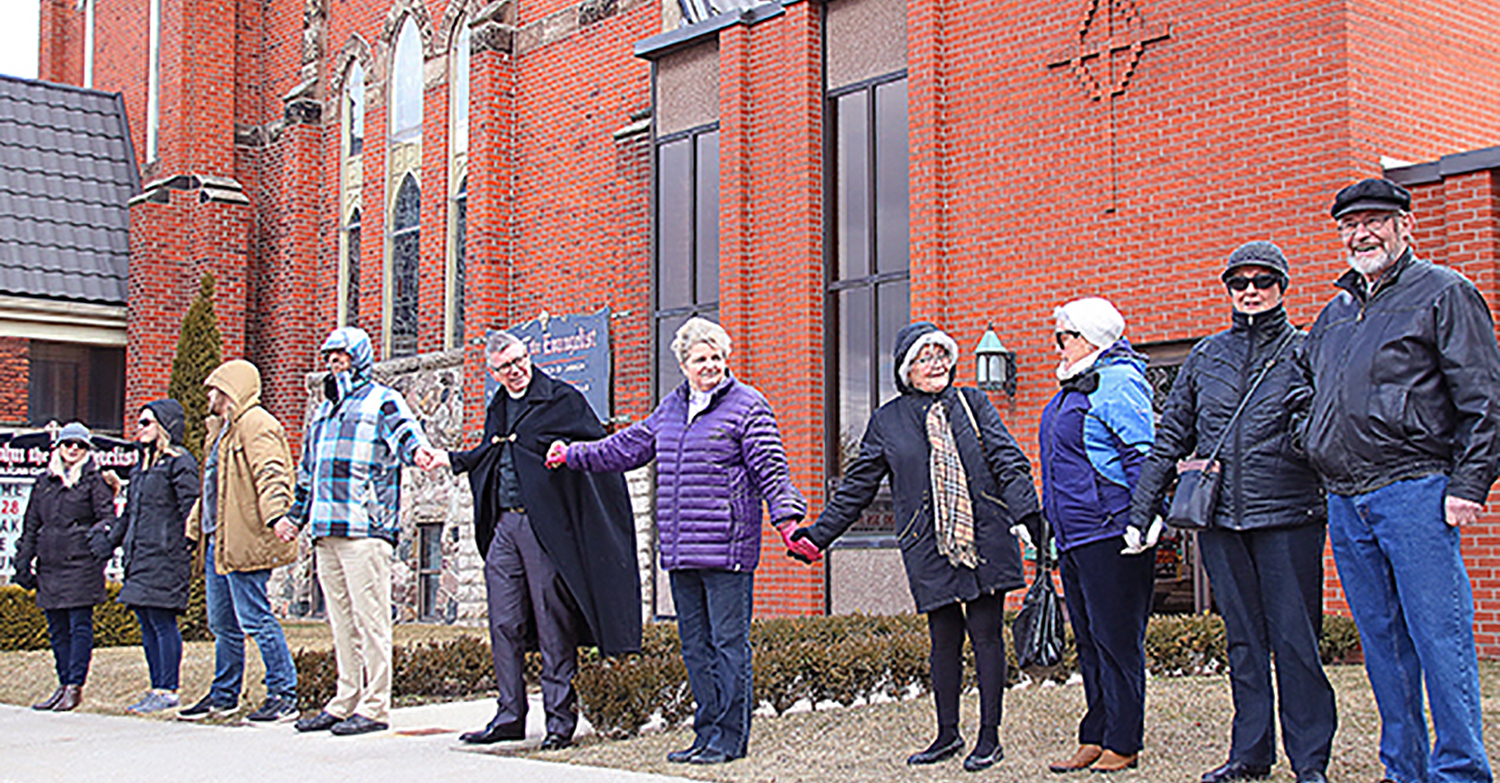 Overcoming fear: the circle of love in front of St. John the Evangelist Anglican Church in Leamington. Photo: Southpoint Sun

Have you ever been afraid?

I don’t think the average Canadian knows the afraid I speak of. My in-laws would because they were children in London during the Blitz. They would understand the fear of being a target and not knowing if something might happen to them.

That fear was palpable the first Friday after the massacre in New Zealand. I went to Friday prayers to offer my supporton behalf of St. John’s, Leamington. My friend Najam Jutt (the Imam) asked me, “Can you believe it?” I had to say “yes,” because that is who we are now, – this terror and violence is a monthly occurrence it seems. And I heard my very words repeated during his sermon, and he said to us that we must respond with love, we are not to return hate with hate. All we want is peace: the Peace Party in Leamington, Ontario, June 9, 2019

The next week, Pastor Sylvia Swiatoschik from St. Peters Lutheran in Leamington contacted me. She suggested the Leamington Ministerial form a ring around the church, as others have around both mosques and churches and synagogues far too many times, because of course we must do something.

Five churches came out, in the middle of the day on short notice to support our neighbours. Yes, they were afraid, several said they were afraid to come to worship, but they saw us standing in solidarity, and they were glad. As Pastor Sylivia expressed, “We can’t realistically use our bodies as a shield, but we can be here and show people love.” She presented Dr Tawil, a board member and local doctor, with a letter from her bishop. Throughout the building, the word love was used over and over again.

This is God turning things back to good purposes. God brought us together through tragedy: initially through relationships with refugees, and through inviting them to our parish picnic. This deeper relationship formed after the shootings in Quebec, because we had to do something for our neighbours and friends.

Najam said of today’s gathering, “It was a wonderful symbol of love, We’d do the same for them, we are both fighting extremism.” Sadly, before I could get through Easter and put these words to paper, churches in Sri Lanka were attacked, and then a synagogue. I cannot imagine what might have happened before you read this. I will say that I was not afraid to come to of my parish that first Sunday. That same day Najam and Shahbaz (a local business owner) came to offer the mosque’s condolences and their support, and to tell us they loved us and felt loved.

Rev. Andrew Wilson is the rector of St. John’s, Leamington.