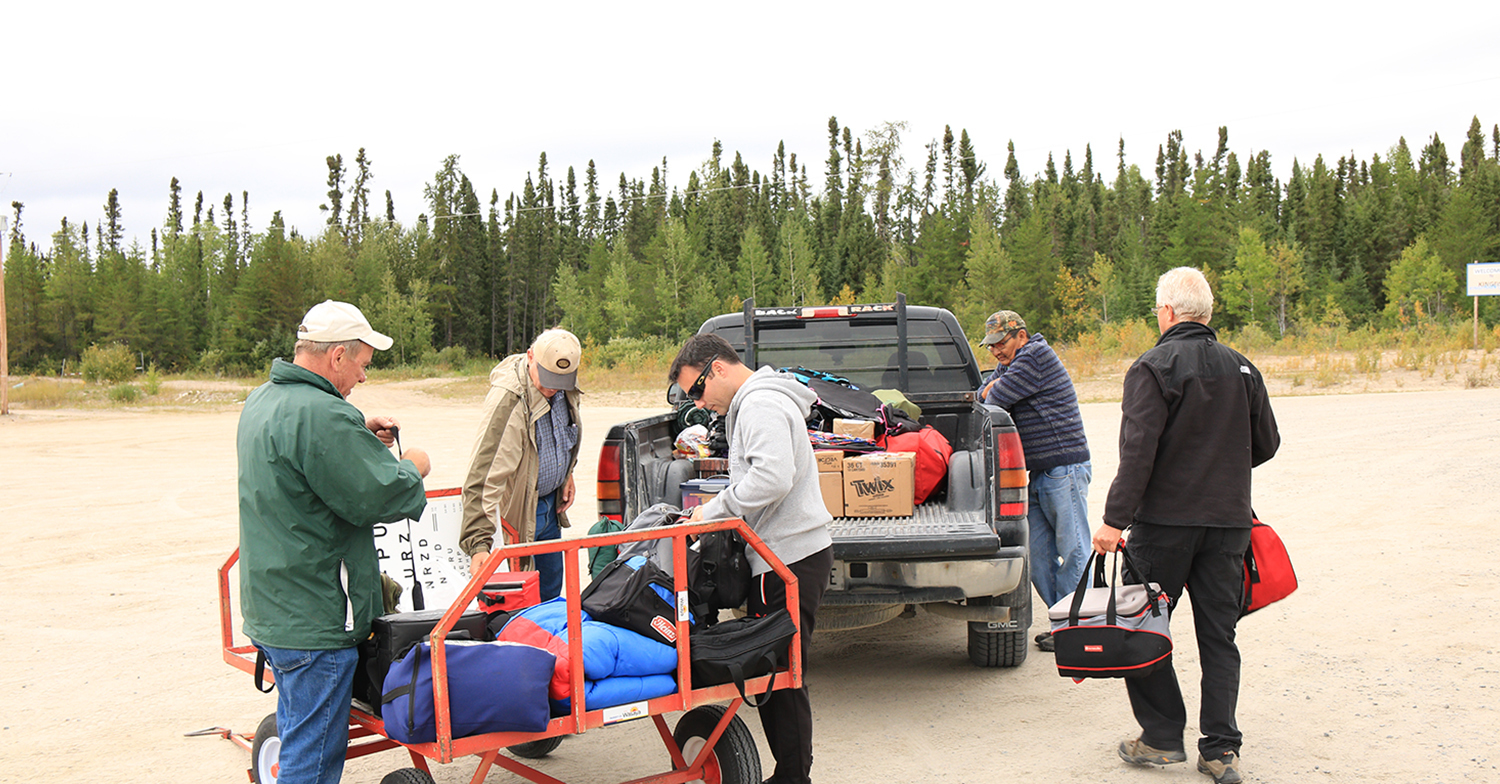 At St. Mary’s (Windsor-Walkerville) they decided to mark 75 years of the Anglican Church Women in Huron by addressing the issue of high food cost in northern communities in Ontario. With the assistance from the Windsor Flying Club and the support of the Deanery of Essex, help was on the way to the Diocese of Mishamikoweesh.

At St. Mary’s (Windsor-Walkerville), we have sent bales to the Far North as far back as we can remember. This year we wished to gather 75 lbs for 75 years to send along in conjunction with all of ACW’s to the north, to the town of Kingfisher Lake, in the newly formed Diocese of Mishamikoweesh.

In the late spring we gathered our donations of clothes, school supplies and dried food goods. When we had packaged all our goods and weighed all our boxes we were happily surprised to discover we had gathered a total of 137 lbs for shipment. We weren’t too happy to discover the high cost of postage to ship 137 lbs. to Kingfisher Lake.

Our ACW met again in June to repackage everything in smaller boxes at lower weights to reduce costs and to consider two or three separate shipments. As the group contemplated repacking and perhaps making two shipments I pondered alternative ways to ship. I gave this a lot of thought and prayer and I also began to research Kingfisher Lake and the northern communities.

The only access to Kingfisher Lake is by air, there are no roads in or out except for a short window of two weeks in February via the ice roads (if the winter is cold enough to freeze the lakes). Everything had to be weighed again and labelled for dispersing among the planes. Finally, all was ready and our journey north began on Aug 31, 2016 in the early hours of the morning.

The Scout plane left just after dawn on Wednesday and made it as far as Geralton, Ontario. The plane was forced to stay the night as the town and area had a massive power failure. The scout plane was to go ahead and relay fuel and flight conditions back to us during our flights on Thursday morning. The rest of the planes left early on Sept 1 from Windsor and all planes arrived safely in Kingfisher by early Thursday afternoon after several stops for refueling.

Once safely on the ground we were greeted at the airport in Kingfisher by Rev. Kitchekesick and several community members and we began to unload the planes and load the trucks and travel into town and unload again at Mission House.

At Mission House we were treated with fresh baked Bannock and hot coffee, a most welcome treat. Later in the day Bishop Lydia Mamakwa greeted us and then we all began exploring the community and discovered how vibrant and welcoming everyone was.

We went for dinner at the local restaurant and were treated to a wonderful meal and then continued to explore the area surrounding Kingfisher. We traveled to the lake and looked across to view Big Beaver House and the ice roads. Warm welcome by the members of the vibrant community of Kingfisher and Bishop Lydia Mamakwa.

That evening most of the community came to Mission House and we were able meet and be greeted and enjoyed a pleasant evening of fellowship. Exhausted from a long day of flying and loading and unloading planes we settled in for the night at Mission House.

In the morning three of the planes had to leave early as they had commitments back home.

My pilot, Fred Tonge, was able to stay and Rev. Ruth took us on a great tour of the community. We went to the community store, the Band Office, St Matthews and were interviewed at the Radio station for Radio North.

At the Band Office we were able to view the new plaque commemorating the establishment of Mishamikoweesh, which was being commemorated that Sunday at Big Beaver House. We then went for a tour of the school and met the principal and the teachers who were preparing the classrooms for the return to school.

We went to the airport with Rev. Ruth and Bishop Lydia and greeted Archbishop David Ashdown who had arrived at Kingfisher Lake for a visit, a fishing tournament and most importantly for the commemoration.

Later Friday afternoon we left for our long flight home, content that we had not just put names to faces but had developed new friendships.

Our visit to Kingfisher Lake was both humbling and enlightening as the kindness and warmth we received was a gift to cherish. We have formed a group which we have named Operation Point North and hope to make this a bigger and better venture each year. With the ongoing assistance from the Windsor Flying Club and the support of the Deanery of Essex and the additional help of a few local groups and community members, we are already planning for next year’s trip.

Ruth Kivinen is Refugee Coordinator at St. Mary’s and a longtime member of ACW.