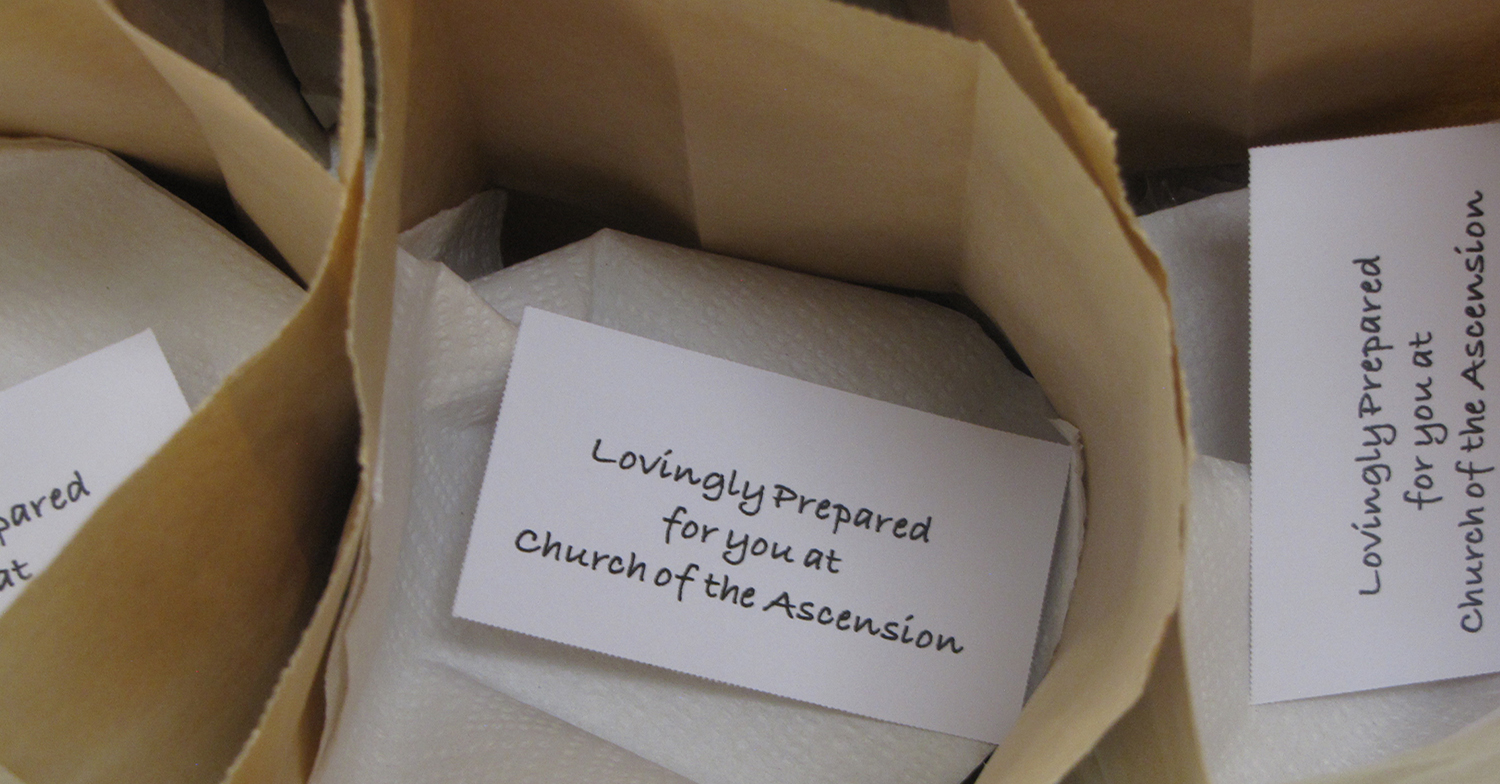 Notes tucked into bagged lunches made at Church of the Ascension in London lets recipients know someone is thinking of them with love.

The Community Breakfast at Church of the Ascension in London had for many years all the hallmarks of an effective ministry. It served almost 100 on average each month. It offered one of the few hot breakfasts among the meal programs in the city. And guests raved about the social atmosphere.

"It was like immediate," recalled Steve Holmes, one of the organizers – the shock still in his voice more than two years later.

The next breakfast was scheduled for only a few days after the pandemic was declared in March 2020 and the Diocese of Huron set down strict health protocols for meal programs. The breakfast went ahead, but organizers knew the “community” part of the breakfast had been lost to physical distancing and other safety measures.

Karen Robinson, another of the organizers, pointed out the obvious: “We still have to feed people." And so began months of pivoting and pirouetting that has been so effective, it has completely changed the way the Ascension organizes its meal program. It has expanded to lunches and suppers over more weeks, while still hoping to bring back a truly community breakfast as soon as possible.

It now all comes under a new name: the Ascension Food Security Program.

The changes started in April 2020 when a small group of volunteers – few enough to allow physical distancing in the kitchen – made up 50 bagged lunches to be handed out at the church door. Each contained an egg salad or a cheese sandwich, a piece of fruit, a muffin, a boxed drink and a card that says “Lovingly prepared for you at Church of the Ascension”. But few people showed up at the door to pick them up.

So the volunteers drove the remaining lunches to places where homeless people were known to gather in London, including a tent city that had sprung up at the fairgrounds and the Salvation Army's Centre of Hope shelter. That pattern has continued: a few picked up at the door and the rest delivered.

Soon the deliveries were expanded to My Sisters' Place, a daytime drop-in shelter for women at risk, and Project Hope, a group of volunteers who go out to the streets and check on London's homeless population. Volunteers with the Food Security Program at Church of the Ascension make muffins for bagged lunches that will be delivered to social service agencies in the city.

In June 2020, Steve organized a drive-thru chicken dinner for church members and took the leftovers to the new Youth Opportunities Unlimited shelter near Ascension. Chatting with the head of their kitchen, Steve offered to provide them with bagged lunches, too.

Now the number of lunches was up to 75.

A bakery contract led to the next major leap for the program.

Cobbs Bakery had supplied several community programs with extra bread at the end of the day and East London community activist Nancy McSloy made some available to Ascension. Nancy needed to make a switch due to a health problem and so Ascension was referred to Stelmar Home Health & Mobility, which also operates a home for people living on Ontario Disability Support Program.

After some conversation with company staff, the Ascension group started supplying dinners to Stelmar residents at cost within the limited means of ODSP. Two weeks a month, they drop off three meals to each resident: a hot meal or casserole to consume that day and two others that can be set aside for other days – a submarine sandwich with homemade soup and a chicken pot pie or sometimes shepherd’s pie. The offerings are altered to avoid monotony.

The Ascension group currently operates with seven volunteers, but that number will need to more than double when the breakfast resumes. The operation is so evolved, it can meet specific needs. For example, the people Project Hope reaches are better served with peanut butter and jam sandwiches rather than egg salad or cheese. On meal preparation days, Ascension’s parish hall looks a bit like a warehouse, sorted into tables for each agency served.

The financing of the program has evolved too.

Donations from Ascension members and the income from Stelmar help make the program self-sufficient.

Ascension’s incumbent, the Rev. Canon June Hough, lately pointed out to the volunteers there are some parishioners who could also use some food support but are too proud to ask for a free meal. Now the group is thinking of selling dinners at a low cost, but enough to generate a small excess that can be poured back into the ministry as it restarts the Community Breakfast.

When it’s all added up, Ascension’s program is now serving 225 to 230 meals a month – more than double the number who were helped by the breakfast alone.

Given the growth, the group decided in April to stop calling itself the Community Breakfast and take the broader name of the Food Security Program.

“It’s sad we have to do this,” Steve said, “but it’s amazing the difference it can make to get people on the path to a better life.”

Sandra Coulson is a parishioner of Church of the Ascension, London