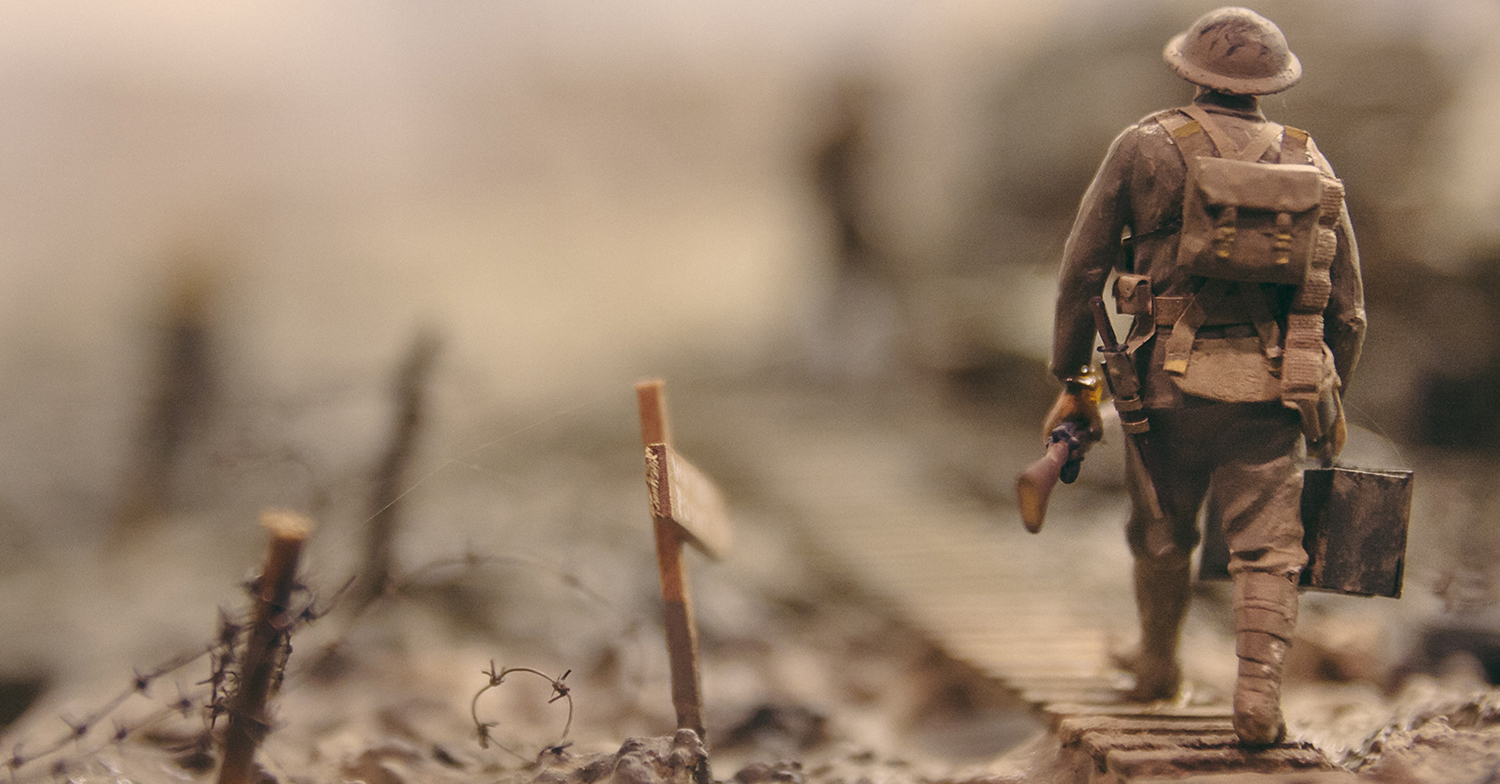 Memorial services or gatherings at a Cenotaph in the centre of a community are not moments best used as a moment for a history lesson. Social media offers many opportunities to explore in significant detail the way in which wars have swept over the face of the globe impacting humanity through countless generations.

Those who choose to brave the elements and stand in silence on November 11th have their own reasons for listening to the sound of a trumpet offering the Last Post and Reveille. The mournful Piper’s Lament stirs emotions which lie deep within the heart.

So often in these moments, there are those who carry pictures of members of their family, whose sacrifice on the field of battle has brought them to the community’s Act of Remembrance. Some of the pictures they carry were taken long before colour photography was the norm and hearken back to a different day and age.

Then there are those carrying contemporary pictures whose emotional wounds are raw because of recent loss. They may have journeyed down the Highway of Heroes as the body of their loved one was repatriated and passed under bridges filled with Canadians waving flags or simply standing in silent reverence and respect.

Personal sacrifice remains at the core of military conflict. In a different world I remember my Father sharing with me a poem he learned as a child:

Major events can be determined by the smallest details. The actions or inactions of a single individual may prove to have a profound impact on the final result of an event, not only on the battlefield, but also in every walk of life.

On May 28, 2000, our nation paused to honour a soldier whose life came to an end at Vimy Ridge, the place where so many Canadian soldiers died on that battlefield in 1917. The remains of the Unknown Soldier were laid to rest at the base of the National Cenotaph in Ottawa.

In her reflection during that ceremony, Governor General Adrienne Clarkson stated:

…no honour we do him can give him the future that was destroyed when he was killed. Whatever life he could have led, whatever choices he could have made are all shuttered. They are over. We are honouring that unacceptable thing - a life stopped by doing one’s duty. The end of a future, the death of dreams.

I write this article on the Day of National Reconciliation. For many families with the loss of a child through the residential school system there is indeed, “the end of a future, the death of dreams.”

The Day of National Reconciliation is a day when Canadians are given the opportunity to engage in a process which will lead to a renewed sense of what is possible, when we live in communities and in a country where respect is both given and received. These are thoughts to be brought to the Cenotaph as we note that Canadians of diverse backgrounds who have served together have experienced the pain of loss through the reality of their comrades’ sacrifice.

This November the 11 will be the first time in seven decades when the Royal Anthem will be offered including the words, “God save the King”. As a part of our national identity the words are burdened with history and are buoyed by hope.

In his book “The Idea of Canada - Letters to a Nation“ former Governor General David Johnston offered this reflection:

We have seen throughout our history this spirit of the Crown and its representatives in action - how it has a power that focuses attention on that which unites us, that which should be celebrated, that to which we should pay attention, and in the process how this spirit helps us to develop our communities and build our nation.
(The Idea of Canada - page 153)

The reality of these days is that the global village is in turmoil. We find ourselves in the midst of a time when personal and global instability shapes the framework of daily news reports. Environmental devastation, economic crisis, military conflict all impact the priority of personal survival in our chaotic world.

At a time like this, as people of faith, we look at the steadfast service and sacrifice which we honour on November 11. We look to the long road of Reconciliation which requires a steadfast commitment leading to mutual respect. We also look at a time of institutional transition when a steadfast dedication to servant leadership by our new Sovereign will continue to offer stability in one element of our national identity.

We are drawn to a prayer offered by many facing moments of crisis both on the field of battle and in their daily lives.

O Lord God,
when thou givest thy servants to endeavour any great matter, grant us also to know that it is not the beginning but the continuing of the same, until it be thoroughly finished, which yeildeth the true glory; through him that for the finishing of thy work laid down his life, our Redeemer, Jesus Christ. Amen
(BCP pg. 635)