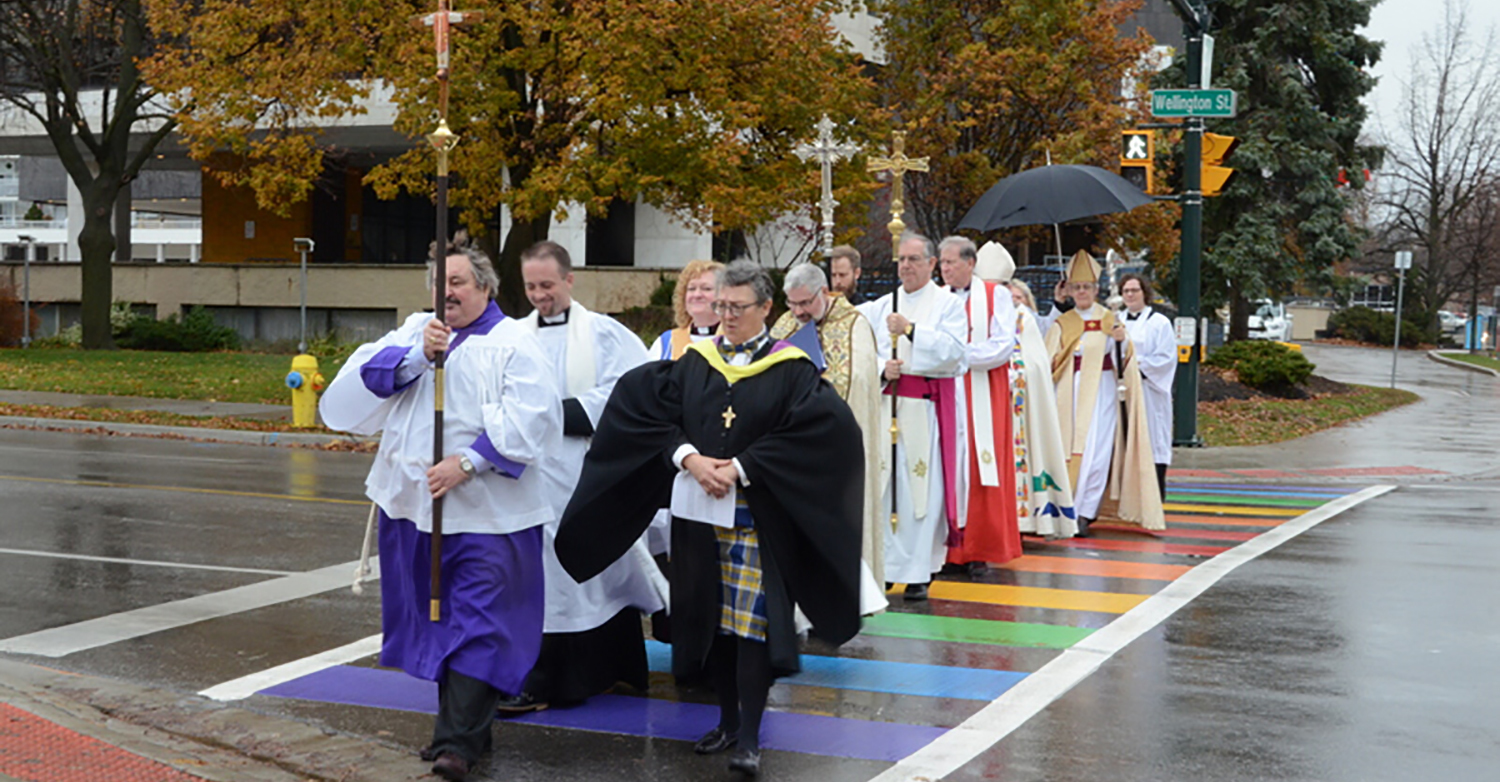 The Anglican Church of Canada, including our own Diocese, has been engaged in challenging conversations about proposed changes to the Marriage Canon (Canon XXI, On Marriage in the Church).

General Synod 2016 passed a resolution to change the Marriage Canon so it will apply to “all persons who are duly qualified by civil law to enter into marriage.” This would allow for same sex marriage in the Anglican Church of Canada. It will only come into effect if passed by General Synod at a second reading in July 2019.

Between the first (2016) and second (2019) reading, the resolution was “referred for consideration to diocesan and provincial synods”. The Diocese of Huron considered the proposed changes during 2017 and 2018 at two consecutive Synods and a series of 16 Deanery Gatherings.

The Marriage Canon Task Force reported, at Synod 2018, on issues and concerns heard at the deanery gatherings and asked synod members for feedback. A large majority of synod members, both in favour of and opposed to the proposed changes, felt that their views were reflected in the report.

For example, one Synod 2018 member reflected that the presentation of the report was, “an open-minded and fair presentation to a difficult question. I am not in favour of changes to the sacrament of marriage. I don’t even feel that it is an appropriate question to be debated in the church”, while another member not in favour of the changes was encouraged by “honesty in the reporting”.

Another synod member stated, “I appreciate receiving this [report] as it provides me with a more informed and comprehensive understanding of the opinions and concerns of our diocese; and yet another expressed appreciation for “seeing the full range of views” included in the report. Many synod members were discouraged that “people [are] planning to leave the church over this issue and by the “prolonged pace of church decision making – that we go so slow in our attempt to listen – to go slow can also be lacking respect.

Also at Synod 2018, Archbishop Fred Hiltz, Primate of the Anglican Church of Canada, and our Diocesan Bishop Linda Nicholls responded to some of the common questions raised in our deanery gatherings. The majority of synod members expressed their deep appreciation of this dialogue. For example, they noted, “the understanding, compassion, and leadership evidenced by our primate and diocesan bishop in their responses to difficult questions and scenarios and their guidance and leadership is greatly appreciated” and that “this presentation has given me a lot to take back my congregation and I will be able to encourage more discussions through the next 18 months. Thank you for all the resources”.

Along with their appreciation, synod members asked for additional resources in the form of a video recording of the dialogue between Archbishop Fred Hiltz and Bishop Linda Nicholls, and conversation starters to use in parish conversations. In response, we created a series of five short video segments. The accompanying discussion guide provides a summary of the video content, suggestions for prayer, expected respectful behaviours at gatherings, and some conversation starters.

There are other resources on the Diocese of Huron website that may be useful for your parish conversations including reports of the Marriage Canon Task Force, timelines, a summary of theological and scriptural issues, the introductory video used at deanery gatherings, the wording of the resolution passed at General Synod 2016, and more.

We hope that these written and video resources will assist congregations in their own conversations. You can find all these resources on the Diocese of Huron website at:

http://diohuron.org/resources (click on “Diocesan” and then on “Marriage Canon Task Force”).

As you can see from synod members’ comments, our Diocese is not of one mind about the proposed changes to the Marriage Canon. People in our Diocese, with opposing views and many questions, were able to engage in prayerful, thoughtful, and frank conversations.

There was uncertainty when we began the process but trust developed as both those in favour of the changes, and those opposed, were encouraged to voice their views and questions and listen carefully to others. As one synod member expressed, “I am encouraged that the conversation continues and is inclusive of all; it seems as though there is more openness on both sides to hearing the either side. We are aware, however, that these conversations and the forthcoming decision may have a different kind of impact and pain for the LGBTQ community.

At Synod 2018 members expressed their gratitude for a pastoral consideration process that gave voice to a variety of views; for the recognition that two faithful theological views of marriage will likely continue to exist in the Church; and for the strong desire to continue to walk together regardless of the outcome of the vote at General Synod 2019.At the same time, there are some continuing concerns about how we engage with one another, and with scripture, theology, social justice questions, or power analysis in the midst of our conversations. While many issues and concerns were raised it does not mean they were all resolved.

It is our hope and prayer that in your parish conversations you too will be able to listen well to each other, use the resources to learn more about the conversation in the wider church, and to pray for our church and all members of General Synod 2019. We close with some advice from synod members:

Keep talking to each other and seeing the other person’s point of view. Courtesy must go both ways.

“We met; we talked; we respectfully listened.”

“I am encouraged by the depth of dialogue that happened throughout the diocese; the commitment to continuing in communion with those with whom we disagree – from our parish family to our international family; that there is room for ongoing discernment.”

“This is still not being understood as an issue of discrimination and injustice, and instead is being debated as an issue where there is legitimacy on both sides. Bigotry will be accommodated.”

“I would like more clarity on why scriptural prohibitions should be ignored in this case. ”

“Please consider the power dynamics and stop allowing hatred to be an opinion.”

“I appreciate all the discussion and resource information available. I also appreciated that all our deanery feedback was listened to.”