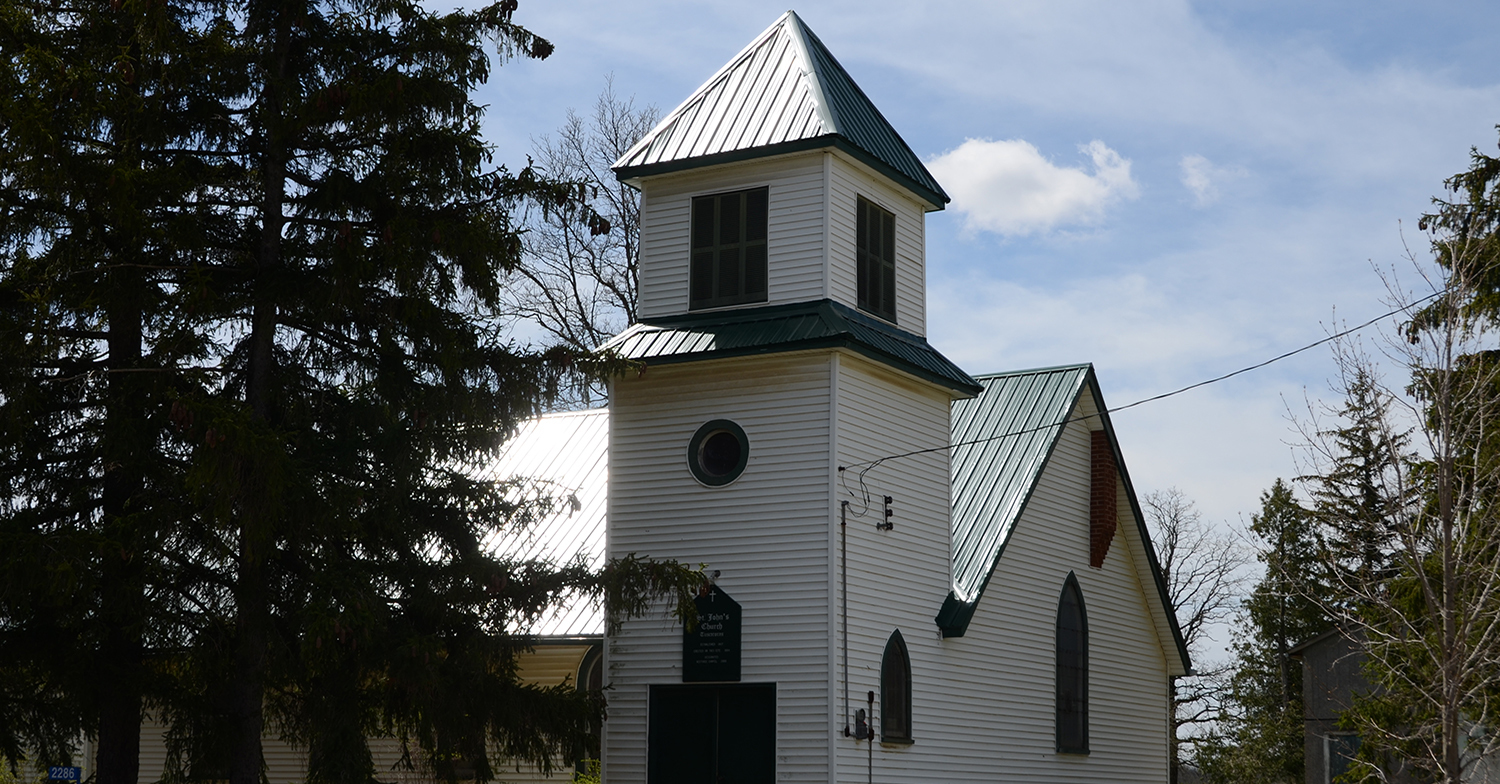 In the wee morning hours of Saturday, June 12, 2021 arsonists damaged a 204 year old piece of history.

St. John's of the Tuscaroras was established in 1817 on the North  side of the Grand River but when it's congregation relocated to what is now known as the Six Nations Reserve, they took St. John's with them.  Piece by piece it was moved across the frozen Grand River and reassembled in 1884 to be rededicated in 1885, at the intersection of 5th Line and Tuscarora Road.  In the year 2000, St. John's was designated an Historic Chapel and became a Chapel of Ease within the Anglican Diocese of Huron.

Distressed by the fire, the remaining members of St. John's requested a community meeting to be held immediately on Sunday, June 13 at 2pm. We did our best to put out the message and the call was heard!

Many sent their sincere regrets and offered their support while 26 were able to attend the outdoor meeting on the property of parishioner Bev Martin, conveniently close to the site.  In attendance were members of the other four Six Nations Anglican churches, members from other local churches, and also, thankfully, Traditional Longhouse people as they too recognized the serious nature of our meeting and have family members on the burial grounds of the church itself. Ven. James Sutton came to show support and Ven. Rosalyn Kantlaht'ant Elm presided over the meeting.

Bishop Todd Townshend of the Anglican Huron Diocese came with a listening and learning heart, having been strongly moved by the events of our community and that of other Indigenous communities in Canada. We came together to support one another in these difficult times, share remembrances, and share what St. John's meant to us.

Ven. Ros Elm, Archdeacon for Reconciliation and Indigenous Ministry, addressed the group speaking to the strong history of the Haudenosaunee People and how this intertwined with the Anglican Settlers that came.

St. John's Trustee Don Lynch reminded us specifically of the history of St. John's – the structure and congregation (the bell was made in Massachusetts in the 1837; the irreplaceable windows are shipped from England; casualties of the Spanish Flu are buried in the cemetery along with the Grandfather of E. Pauline Johnson – John Smoke Johnson).  He also discussed the removal of the separate hall two years ago to deter vandalism and arson.  Don expressed how helpful the authorities have been and wondered how we could safeguard St. John's further.  He spoke to the efforts he and fellow parishioner Ron Monture had taken since the arson the morning before, cleaning up and removing artifacts in fears of more attempts being made.  Exhaustion was a factor as they bore the load of the disaster and Don himself had protectively camped out over night in fears the arsonist would return to finish the job.  Dorothy Russell Patterson of St. Luke's praised “the boys” for their love and dedication.

Cindy Carpenter, who is Christian and Traditional, was the first to speak to her fond childhood memories of Christmases celebrated and the strong St. John's attendance that led to hugely successful fundraisers for the Community providing support for many organizations like minor sports, big quilting bees and dances.  Predating phones and the internet, St. John's bell would be rung once for each year of a person's life when they passed so that the Community would know who had died.  Later the Carpenter family moved on to attend at Christ Church but she did not forget her original home at St. John's. Terry Monture reminisced of growing up to be honoured joining the ladies in the choir and reiterated the hub of activity St. John's provided for the Community.  “St. John's is a testament to the pragmatic resilience and endurance of our people!” Historian Dr. Barry Hill of St. Peters confirmed the mutual love and respect between the Six Nations Traditional and Anglican people.  At the 1885 Council House everyone “hung their hat at the door” and left their faith out of the conversations on how to govern the people -it was an atmosphere of mutual respect.  “This fire was a sign of total disrespect to those people!” and those who did this don't know the actual history of their own people.  He has been disappointed in the misinformation writers have offered in the past.  As Chairman of the Mohawk Chapel Committee, Barry is very concerned by the threats made against it and the other Reserve churches! Her Majesty's Chapel Royal is a “living wampum, a true vessel of education and must be preserved for future generations!  It is the opportunity for the Great Peace Maker and the Saviour to be in the same room!“ as is St. John's of the Tuscaroras.

Ruby Jacobs of St. Luke's expressed condolences to the parishioners of St. John's and so did many of the representatives from other churches.  She finds it sad such anger is found in the younger people of today to the point they would commit such acts and we need to reach out.  “The heart beat of Mother Earth is calling us together.  It is the responsibility of our generation to teach them.  We need to find positive things to do to help.”  Ruby as a Christian married her Traditional husband and lived in harmony, in love and mutual respect, for over 50 years until COVID took him.

Arlis (daughter of Iowne Anderson, a faithful matriarch of St. John's), who is now Traditional, recalled how much fun it was to be a part of the St. John's Young People group and attend events with other churches.  She expressed how important it was to use this as a time of teaching respect for both ways (Christian and Traditional) and honour both sides as her mother did - all should stand strong together!  Iowne Anderson's Traditional funeral and Christian burial was demonstrative of this!

Leslie White of St. Luke's was confused as to why there were calls on Facebook to burn the churches on Reserves.  As she so accurately put it, “What good would that do?  It's not going to change things.”   Addressing the anger aspect, Michelle Davey of St. Paul's said she wished that “we could help, but felt in this case our help would not be wanted”.  Given that it is believed this act of arson was directed at the church because of the recent intensifying anger regarding the Church involvement with Residential Schools, her desire was that the Anglican Diocese be forthcoming with any documents pertaining to the Residential School system.

Our host Bev Martin felt a loss as St. John's was closed to regular services and used only as a Chapel of Ease – she still misses the fellowship and the hymns in Traditional language, but realizes the structure is “only a building and it is the people who make the Church.”

Ultimately “They can't burn the memories!  We should compile a memoir of what everyone can write down!” says writer John Patterson. from St. Luke's.  However, he's not the only writer interested in documenting things.  Christian Nahnda Garlow of the Two Row Times and Arlis' daughter, freelance writer Courtney Skye both desire to tell the intertwined historic truths of the Six Nations Traditional People and the Anglicans who settled with them.  We must get the message of our real stories out there for a better understanding of each other.

Ron Monture, informed by a family member who works for the Government, shared with the gathering there should be very generous grants available for restoration that he would check into.  He maintained all that we can must be documented, including a comprehensive study of the graveyard.  He recollected after the meeting that Bishop William Townshend (grandfather of the current Bishop Todd) visited St. John's for confirmations and boldly stated, “Without the People of Six Nations there would be no Diocese of Huron!”

“Thanks for recognizing our pain and loss”, acknowledged Arlis.

While the memories were fond and the discussion was sombre, there were still jokes being made and teasing going on.  Eva Tripp of St. Luke's noted “Even in our darkest times we can still laugh!”  But the question remains how do we as a Community move forward?  While that is uncertain, it is clear that something must be done.  “Some people sacrificed everything and it might all be erased” asserted Don.  The Ven. Ros Elm's own Christian and Traditional upbringing on Oneida Reserve is a testament in itself.  Ros explains “The Good News and the Good Mind can coexist together!” -they both celebrate the love of creation and having love and respect for each other.  Whatever way we move forward, let's do it with love and respect between people.

Elaine Burnside is the rector's warden at Holy Trinity, Burford and pastoral assciate for the Six Nation Parish.

Photo:  From left to right - Don Lynch, Bev Martin, Ron Monture.  The day following the arson of St. John's of the Tuscaroras, parishioners are assessing the extent of the damage and removing artifacts for safe keeping.