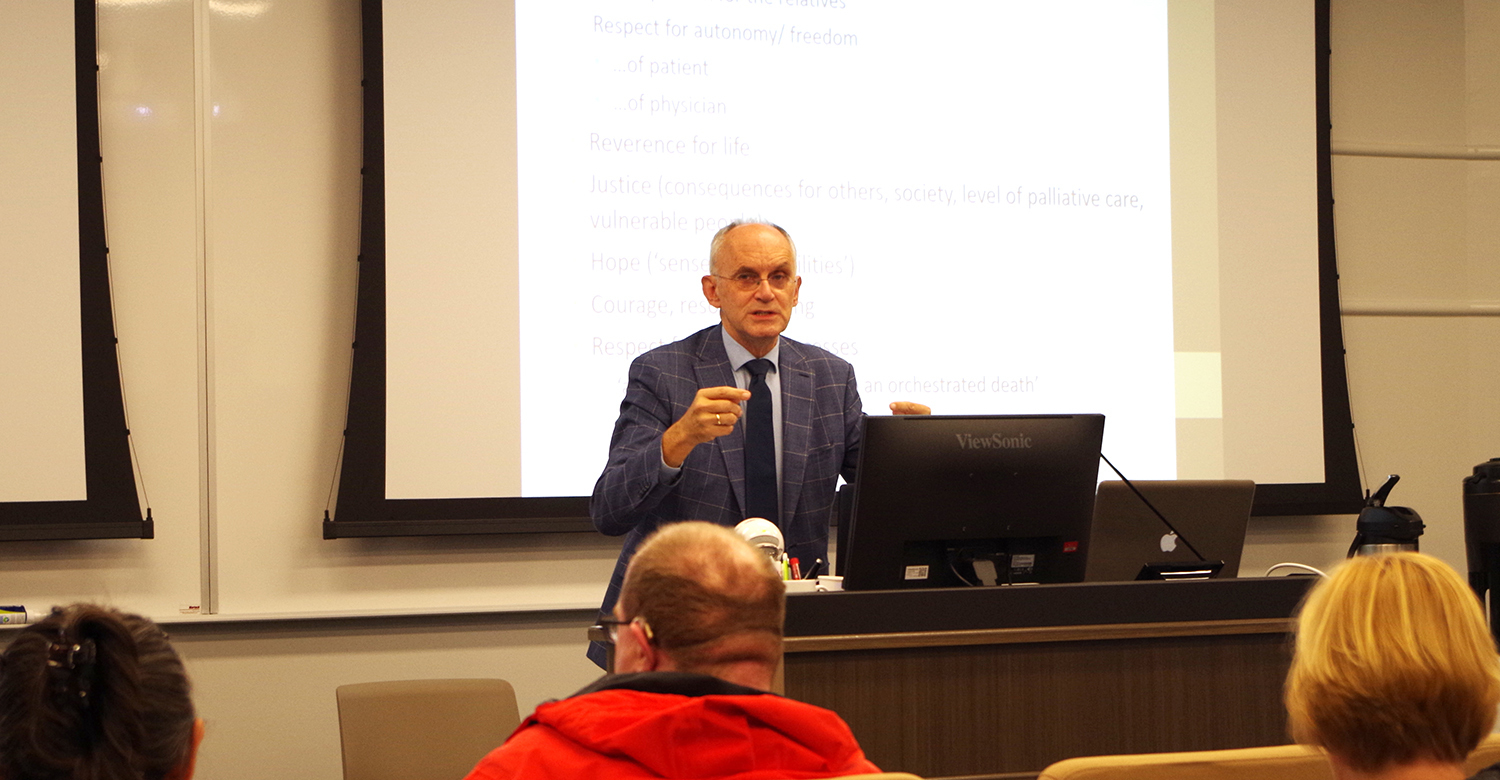 Elsewhere in this edition of the Huron Church News, you will find a story by my friend Davor Milicevic about a Huron at Western theological conference titled “Medical Assistance in Dying: A Theological Consultation for Canadian Anglicans.”

It was a most stimulating discussion coming from a variety of perspectives and I extend my thanks to Huron for organizing such a wonderful discussion. I am saddened that the conference didn’t receive the attendance it richly deserved, but it did end up being an intensely busy weekend in our Diocese.

In fact, I was unable to attend the Friday session, however I have heard the Rev. Dr. Lizette Larson speak on the subject before and I have read articles by Canon Dr. Eric Beresford on this timely topic as well.

My deep thanks to Archbishop Greg Kerr-Wilson of Calgary and Bishop Michael Michael Hawkins of Saskatchewan for their deep, respectful, reasoned and broad discussion of the many facets that can be part of the much needed conversations that we need to have as Anglicans and Canadians on a topic that will only grow more front and center as time goes on.

Professor Trudo Lemmens did an admirable job on the legal and political implications of Medical Assistance in Dying as we move forward in this country. I found that Bob Tees, a Spiritual Bereavement Clinician from Hamilton brought tremendous first person experience on the experience of Medical Assistance in Dying, not only for the person using this legal avenue, but for the family and friends that make the journey as well.

Hands down, however, for me: Dutch theologian and scholar, the Rev. Theo Boer was the “star” if you will of this show. Those who read this column regularly, will know that I have been present twice as a person quite close to me opted for Medical Assistance in Dying. While I am far from wanting to give blanket permission for all to access this medical assistance, I believe that there is a place for this in our society. Both bishops, while sounding strong concerns and speaking more against than for; where clear that there is a place for this in our world. They confirmed strongly, and I share this, that as Christians, we are never allowed to abandon anyone in their time of greatest need, regardless of our own thoughts about what is happening.

Euthanasia has now become a default way to die in Holland, rather than a last resort.

It was into this frame work that Theo Boer first walked us through the now 50 year relationship of Euthanasia (the title he used) to the people of Holland. He took us step by step through the process in which Euthanasia became legal and how it has changed Dutch society as to how they see death and related issues. He provided some valuable statistical information as to how the practice of Euthanasia has grown, with cases tripling between 2002 and 2019. It lead Professor Boer to remark, “We now live in a culture in which death is a solution to any unbearable suffering.” He went on to suggest that being dependent on someone else for on going care and meaninglessness in life are the two strongest reasons why people seek Euthanasia. That was startling to me, as neither of those criteria are part of the legislation in Canada, nor would I want to see either of those reasons become prominent in this country. It was somewhat chilling when Rev. Boer stated, “Euthanasia has now become a default way to die in Holland, rather than a last resort.”

In his second presentation, the concluding address of the conference, the Professor turned his attention to more theological and personal observations. In effect, he was giving us a clear understanding of what happened in Holland, so we would be able to engage people more widely in this country to see what could possibly happen here should our laws be broadened.

Professor Boer has been engaged by the Christian Reformed Church in Holland to write a report in 2021 that he will title “The Good Death.” He expanded on some of the things that he is currently considering for this major report. Some of what he said next, was somewhat unsettling. However, it also convinced me, that as a Christian and someone who believes there is a limited role in Canadian society for Medical Assistance in Dying, that I am obligated to participate in widespread education to ensure a proper understanding can be shared.Professor Boer shared statistics that made me cringe. A significant percentage of people in the Dutch Euthanasia process were asked about eternal life and most said it was about reuniting; with family and friends and even pets. But God was barely ever mentioned in the conversation. He says that indicates that we need a theology that all can be involved in as we together learn.

It is key that we remind people that human autonomy is not the “king” in this debate and that God’s will must be front and center.

Rev. Boer says he sees a shift from life being a Divine Gift of God, to something that I can do what I want with. That cannot be the place from which discussion starts, but rather we must find a way back to people seeing life as from God.

His treatment of Moral Pluralism, as opposed to Subjectivism, as opposed to Absolutism was a moment that brought great clarity for me. He said Absolutism means there is only “one” right way. That can still divide, because some will say one way and that is in favour and others will demand one way only and that is against. Subjectivism, Professor Boer outlines as, there are no wrong answers. Moral Pluralism, which he feels is the way forward, posits that while it is not always clear what might be the way forward, there is more than one good option. He fleshed that out by saying, “While there may be multiple good options, there are still always wrong answers as well.”

Professor Boer concluded with some good advice for the Church as to how to discuss Medical Assistance in Dying in public debate. He says it is key that we remind people that human autonomy is not the “king” in this debate and that God’s will must be front and center. However, he says it will not work to promote only one value, but rather the key to discussion is openness to multiple positions to advance discussion to find the best fit for all of society. That means that first and foremost we must engage people of faith and people of no faith and to come to understand the reasons for all the positions that various people might wish to bring into the discussion, rather than trying to shut down all talk that isn’t pointed to one single conclusion.

He asked us to be very careful in what data and statistics we might try to bring into our discussions. Only “uncontested” empirical data should be used. If we use personal generalizations and posit our thoughts as proven facts, the discussion will not advance. However, he did add that, in discussing Medical Assistance in Dying from a faith perspective, we would be wise to presume in favour of life and not allow killing to seem to be normalized in a way he sees it happening in Holland.

His final word was that the faith community must continue to talk, both with those of faith and those outside. Our selling point is that God is in charge and we need to journey to understand what that means together.