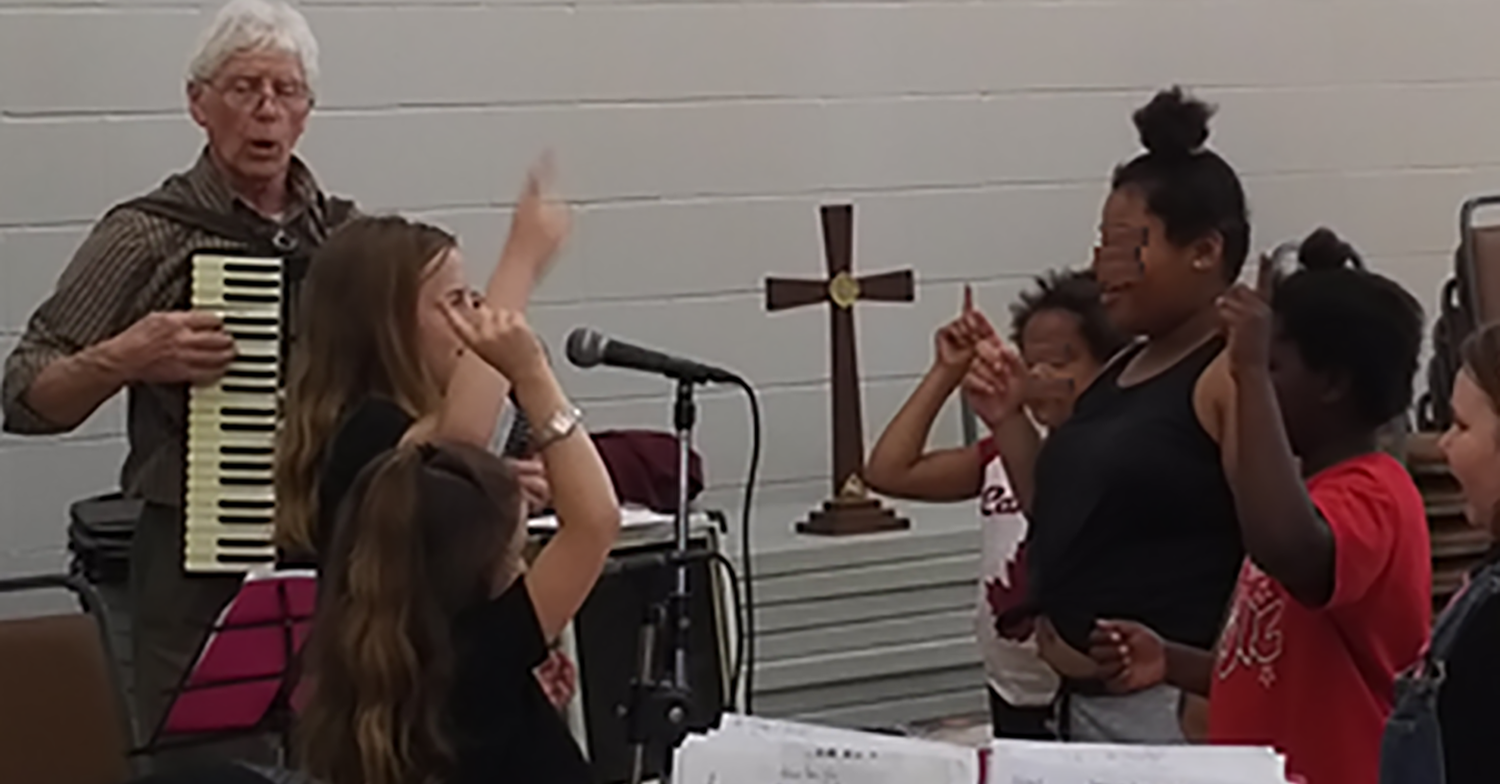 Ministry of music at St. John the Evangelist, Leamington is centered around Steven Acott and his engagement in Messy Church program.

When did music become ministry? That is the question Steven Acott asks himself often after his nearly seventy years of musical education, teaching and practice.

A long-time parishioner, Steve leads St. John the Evangelist’s Messy Church music program. What started as an invitation to play the odd song at Messy Church has turned into dedicated service to God and music, with a full ensemble.

Like many kids growing up in London England, Steve was in Cadets. Playing drums and bugles, he chose his next step after school: at the ripe old age of fifteen he joined the Royal Marines. Considering himself a percussionist, but with that section of music at compliment, he continued his musical studies with the Royal Marine music core until he was able to transfer into the percussion section.

In the Queen’s army, religion was included: all Anglicans report for confirmation ‘training,’ the rest, are excused. After the mandatory twelve year service, where he saw the world travelling with the Royal Navy, he took up further studies in London, and began working in theatres, television and dance halls for many years.

After hearing from his in-laws about a golden land named Canada, he joined them to, “give it a go for a year.’’ That was around 1970.

Steve was a member of the Windsor Symphony, and again played in theatres and halls. But the business changed, and he needed to explore other options. After years of offering his skills with music to schools for free to introduce students to the craft, he was invited to explore teaching. He went back to school and obtained his degree and taught for many years.

Fast forward to 1990, more changes in the music world and he moved to Leamington as part of a fresh start. Here he met Fran, the love of his life, a lay minister and eventually his wife. For twenty-five years they played together at retirement homes as he built a business to support them both.

At some point, he was introduced to the local Old Colony Mennonite community. A family was looking for a music teacher for their children but who also had a complimentary faith. At one point, Father quizzed him quite rigorously, and then pursued Steve for six months before he felt he could fit the new family in.

Where did he derive his faith skills?

Besides the Army, Steve remembers Sunday School fondly, with a life-long memory of Mrs. Fashion whose gifts and faith mentor him to this day. Even as he may have drifted to and from church participation, Steven has to admit: “She always gave me inspiration.”

Steven’s teaching always includes some instruction, not simply how a hymn is in 4-4 time, but why the hymns and words were significant. There is great meaning in the hymns he choses. It is not simply about correct technique, the songs have substance and deepen faith.

Three years ago this month, tragedy: Fran passed suddenly, leaving him rudderless: “How do I continue?”

Not just his church family, but also his student community of eight families and twenty-plus children opened their hearts and homes and ministered to him. Dinners, which opened with prayer lead to an invitation to him to lead prayers. Recitals at St. Johns, a room packed with extended families, he also opened with prayers.

Movies and other times together eased the pain and gave him new life and a new hope as he learned to live without Fran at his side, but still in his heart.

After some apprehension, because of the tremendous trust he built, his students agreed to perform at Messy Church. He proposed it as ecumenical and non-denominational, but Christ centred and indeed, Church.

What was a chance to perform in front of people is now an important time of community, for all families: Anglican, Mennonite or new to Christ. They felt welcomed and the kids love to participate in the stories and crafts; they were once quite perturbed when we moved the date and some missed attending.

Steve knows that at some point God spoke. He is just unsure of exactly when. Through his loss, God responded to his pain, and said, “I have a plan for you, I’m going to take you and the music skills you’ve accumulated your whole life and we will form a new ministry together.”

Little by little, he found a new spiritual direction, which became, in his words, “my own ministry.” Music opened his faith and now he uses it to open others.

It has been a joy to walk this path together and discover his faith and lifelong ministry.

Rev. Andrew Wilson is the rector at St. John the Evangelist, Leamington.