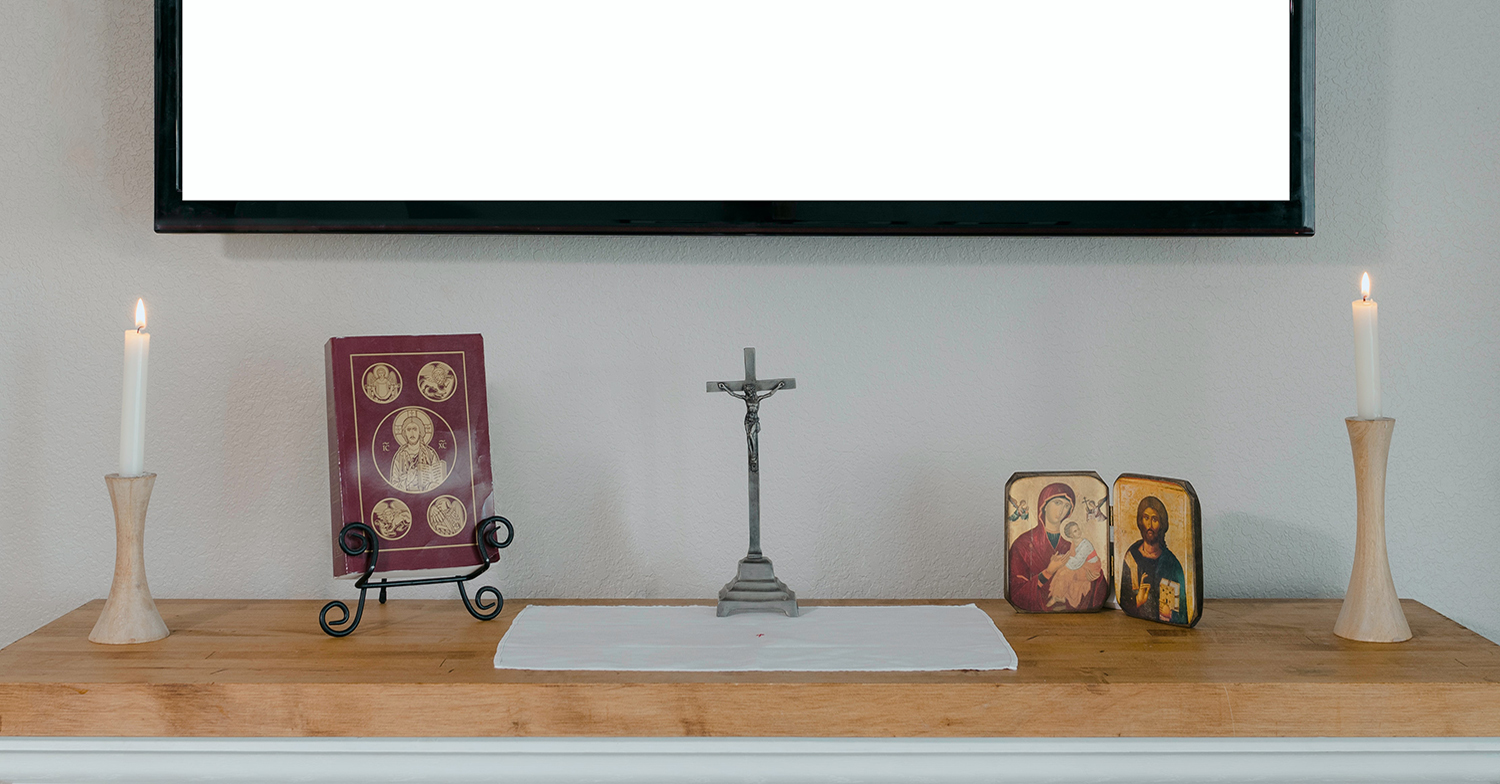 I heard a loud voice from the throne saying, “Behold, the dwelling place of God is with man. He will dwell with them, and they will be his people, and God himself will be with them as their God.” Rev 21:3

When I have finished high school, I spent some time in northern Manitoba helping the church with some projects.

While I was there I spent the summer living with a nun. She spent most of her life working to better the lives of people in the surrounding communities. She also ran a kind of guest house. Not a typical bed and breakfast; rather a place where she was Martha and Mary to those of us who stayed with her. I recall her moose stew was to die for.

This sister had a rustic and simple altar, a place of devotion, within the common area by the bedrooms. It was located close to the guest rooms. I watched her every day for over a month. She would clean and do a simple prayer whenever she passed by the altar. I never saw her praying there, but it was well kept, with pressed linens, books and other things that were changed often.

Halfway through the summer, my schedule changed, and I found myself waking up before 5 am. I prepared myself quietly, tiptoeing through the hallway when the house was still dark. I noticed the altar had been attended to, having the Bible out to the daily readings, and having all the proper colours for the season or feast were out. The sister was up, and sure enough, I found her in the sitting room, eyes closed, quietly praying in her armchair. She didn't expect me to be up, as I noticed her hearing aids were out. I think I nearly scared her half to death that first day. But she was there every morning in her armchair, praying with a rosary in hand and her chair facing the window.

This was her schedule; she would wake up at some earlier hour, go to the altar and prepare it for the day, then go to a space in the living room, knowing she would not be disturbed. She would take out her hearing aid, pick up her rosary, sit down in her armchair, and begin to pray. She would be in that place till 7 am when she would make breakfast for herself and anyone in the house.

The presence of the altar in the house nagged at me. Why have the altar if it’s not a place for prayer? Why work so hard keeping it if it wasn't adding to her prayer life or relationship with God?

One evening over dinner I finally asked her. She informed me warmly that the altar was a call to prayer, a devotion, and an act of service to God. For her, it evoked a rhythm to her prayer life. The call to prayer was heard by all who lived and stayed in the home, but most of all it was the place devoted to her spouse, Jesus. It was a place she passed by often, and a place that called to her often; it spoke into the busyness of her life “come and rest with me awhile” (Mark 6:31).

She told me that building an altar or sacred space is an act of intention and prayer. The act that can if done in and through prayer can help us to grow closer to God. I came to see the altar as a distillation or manifestation of my desire to have God’s presence in my life and in my homes. It is a distinct place for God, think of it as God's throne in your home, a place where God is welcomed.

All over the Bible people are building alters as a sign of devotion to God. Jacob built an alter after he experienced God in a dream, he called the place El-bethel, because God had chosen to reveal Himself there. All of our patriarchs and matriarchs in the Old Testament had this practice of building an altar as a sign of devotion and thanksgiving, and animal sacrifice. The tradition of sanctifying a place in the home (or tent) to God is part of our spiritual heritage. This continued with Christianity. Just walk a back road in Europe, you can’t throw a stone without hitting a shrine, chapel or place for spiritual devotion.

In the time of COVID, of war, insurrection and protest, perhaps we could use these symbols that say, “come and rest with me awhile”, in our lives and in our homes. Not for animal sacrifices! We can’t offer anything as gift to God that isn’t already His! No, your altar won’t be for goats or physical “gifts” but maybe, perhaps our contrite hearts, and dare I say we could offer our broken world. This would be a place for God in our homes, and let’s face it folks he is literally dying to be invited in. I don't know if Jesus ever built altars, but in truth, he was the altar, the priest and the sacrifice. His altar was the cross, and we can call that THE altar of sacrifice. Christ used to go into the hills privately to pray, in a lot of ways his altar was the world. If that works for you, good. If your like that sister I knew years ago, perhaps this is something calling to you, what I liked about this nun’s altar was that she didn’t feel she had to use it for prayer, in her life it was a physical reminder, she saw it as a call to prayer.

How do I make an altar, you may ask. It comes from inside you. The only mistake in making an altar, is to do it for anyone or to impress anyone. For some people, the altar is in a space that you can't necessarily sit at. For other people, it is a side table next to a comfortable chair where you sit every day for prayer. One has to understand themselves and their habits in order to fully know where and how to place their altar. In my father's house, his fireplace is his altar, where he puts the most interesting things: pieces of wood and rocks next to a crucifix and a small statue of the Virgin Mary. That is nothing like mine. Mine has icons, a candle, my book of psalms, and some other devotional things. Yours may be a combination for your family’s devotional objects, or it may be as simple as a lit candle.

I have come to find my place of daily prayer to be on my porch, under a heated blanket in the winter. This works well for me. I do have an altar in my house, it is a space set apart for God that calls me to prayer every day. I do pray there as well, but we cannot limit ourselves in prayer, we must let God be God and let us be, well, us. I learned long ago not to hide it away (if I can’t see it, it can’t remind me). It is for me like the bells of medieval Europe, the cry of “Allahu Akbar” from the towers of the mosques, or the apostles in the time of Christ living by the hours of the temple. Sometimes you take out your carpet and you pray where you are. It is up to you to discern what that means and how that looks.