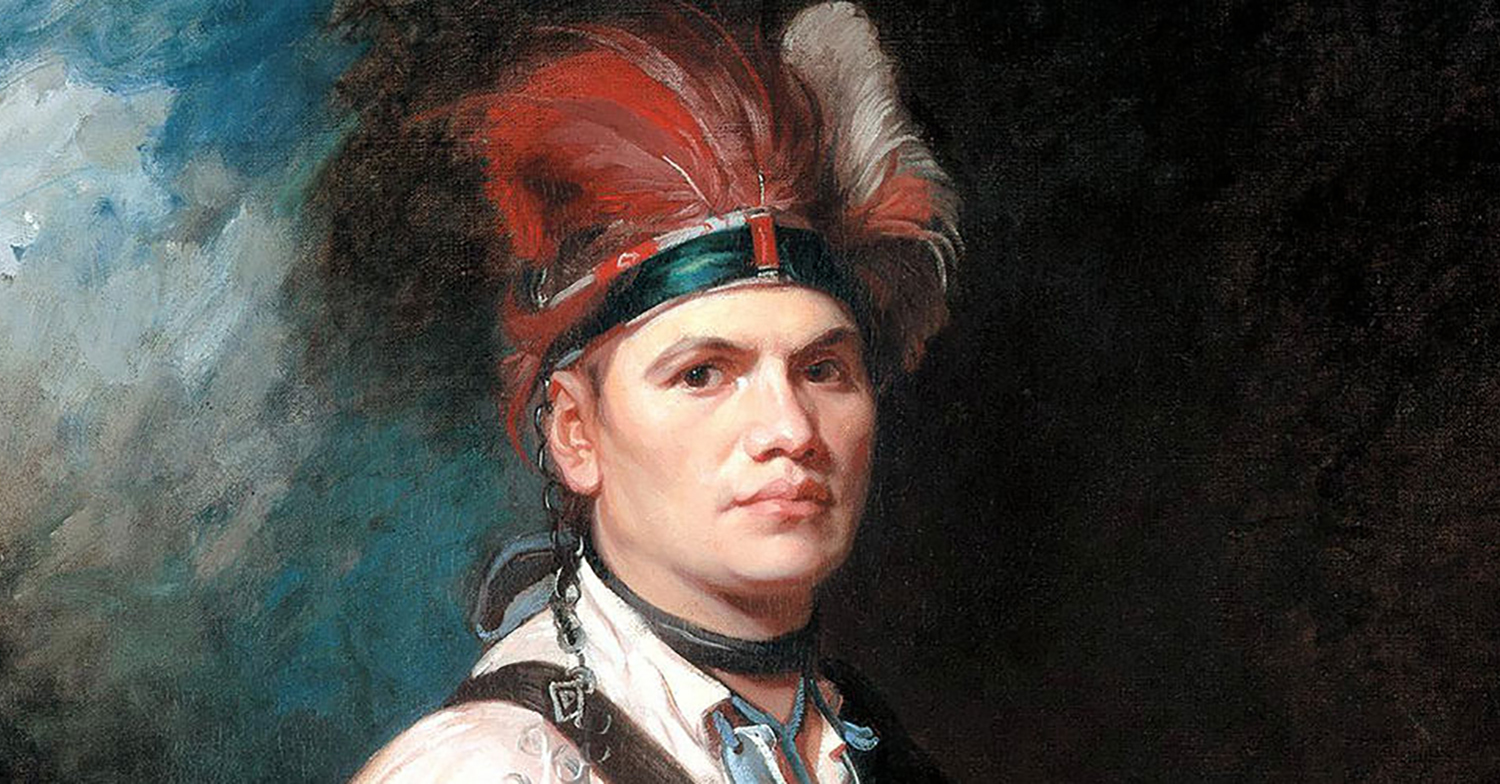 Her Majesty’s Royal Chapel of the Mohawks, located in Brantford, Ontario, is the oldest Protestant church in continuous use in the Province and the oldest church building in the Diocese of Huron.

Constructed in 1785, it is the successor to a previous chapel endowed by Queen Anne in the early eighteenth century, but lost because of the British defeat in the American Revolution. The queen gave the original chapel a sterling silver communion set, a part of which remains one of the great treasures in the current chapel‘s possession.

While First Nations people are often overlooked in the history of Canada, Joseph Brant is an exception. A city, a county, an Anglican deanery, a modern hospital and many streets all bear his name. Schoolchildren encounter him in texts covering the history of pre-confederation Canada. Brant was a controversial visionary whose dreams for his people were not realized. His Anglican faith was one of the foundation stones of his complex career.

Born in the Ohio country south of Lake Erie, Joseph Brant grew up in a time of great conflicts. French-English warfare from 1755 to 1763 was quickly followed by the American Revolution (1775-1783) coupled with rapid colonial expansion. Brant’s Mohawk people played important roles in all these changes.

A protégé of Sir William Johnson (1715-1774), the Northern Superintendent of Indian Affairs, young Brant was educated at Moor’s Charity School, later Dartmouth College, under Eleazar Wheelock. He participated in frontier warfare and went to imperial London on two occasions as a member of diplomatic missions. These experiences made him a man of two worlds.

Brant did his utmost to secure the future of the Hodenausenee or Six Nations in these challenging circumstances. Britain’s defeat in the American Revolutionary War caused the loss of ancestral territories for those indigenous peoples who had remained loyal. The Six Nations confederacy was itself split apart on the issue of which side to support. Brant led efforts to obtain compensation for these losses. By the mid-1780s, new lands were obtained on the Bay of Quinte and in the Grand River valley.

The Haldimand Grant of 1785 consisted of lands six miles wide on either side of the Grand River from its source to its mouth. Some of these lands were later surrendered and sold. The precise nature of these 19th Century arrangements remains a source of sometimes bitter controversy in the 21st Century. Brant saw these holdings as the key to his people’s future, thinking that some lands should be retained while others could be sold to create financial capital. He believed that such decisions should be made by native proprietors and accordingly argued that aboriginal title conferred the same rights of ownership as those enjoyed by the general colonial population.

British North American authorities saw native title as one of occupancy and use, rather than one of absolute ownership. Frustrated by their inaction, Brant at one point led 300 armed and war-painted warriors to York (now Toronto), the provincial capital, in protest, causing great panic as the town’s population was about the same size.

Seeking to create as much diplomatic strength as possible, Brant actively pursued the creation of a northwestern indigenous confederacy in the lower Great Lakes, believing this would increase First Nations’ impact on the formation of public policy. His efforts, however, were frustrated by deep divisions and rivalries.

Journeys to imperial London and to Philadelphia, the temporary seat of the new American government, exposed Brant to the workings of the highest levels of society and politics. By the 1790s, he had built a splendid house in Wellington Square, now Burlington, which was staffed by both white and black servants dressed in livery. Some of his own people felt that he no longer understood them. Brant believed that colonial officials had to see and treat native leaders as their equals. His own circumstances were designed to encourage such diplomatic equality.

As he aged, Joseph Brant worried about the continuity of effective Six Nations leadership. His eldest son, Isaac, died in 1795 after a violent family quarrel. John, a younger son, was still a boy. Brant turned to the enigmatic John Norton – the subject of our last column – as his successor.

Brant’s Anglican faith was central throughout his career. He sponsored the construction of churches and chapels, championed education and translated the Anglican liturgy into Mohawk. He was frequently critical of European and colonial societies, accusing them of being un-Christian and arguing that his own traditions were more closely attuned to the gospels than theirs. As a man of two worlds, Brant sometimes felt he belonged in neither. Being a person of the middle way, as Anglicans know well, is never easy. Joseph Brant’s mixture of optimistic idealism and political realism deserves study and remembrance.

Rev. Dr. Douglas Leighton is the canon historian of the Diocese of Huron.

Some Suggestions for Further Reading: