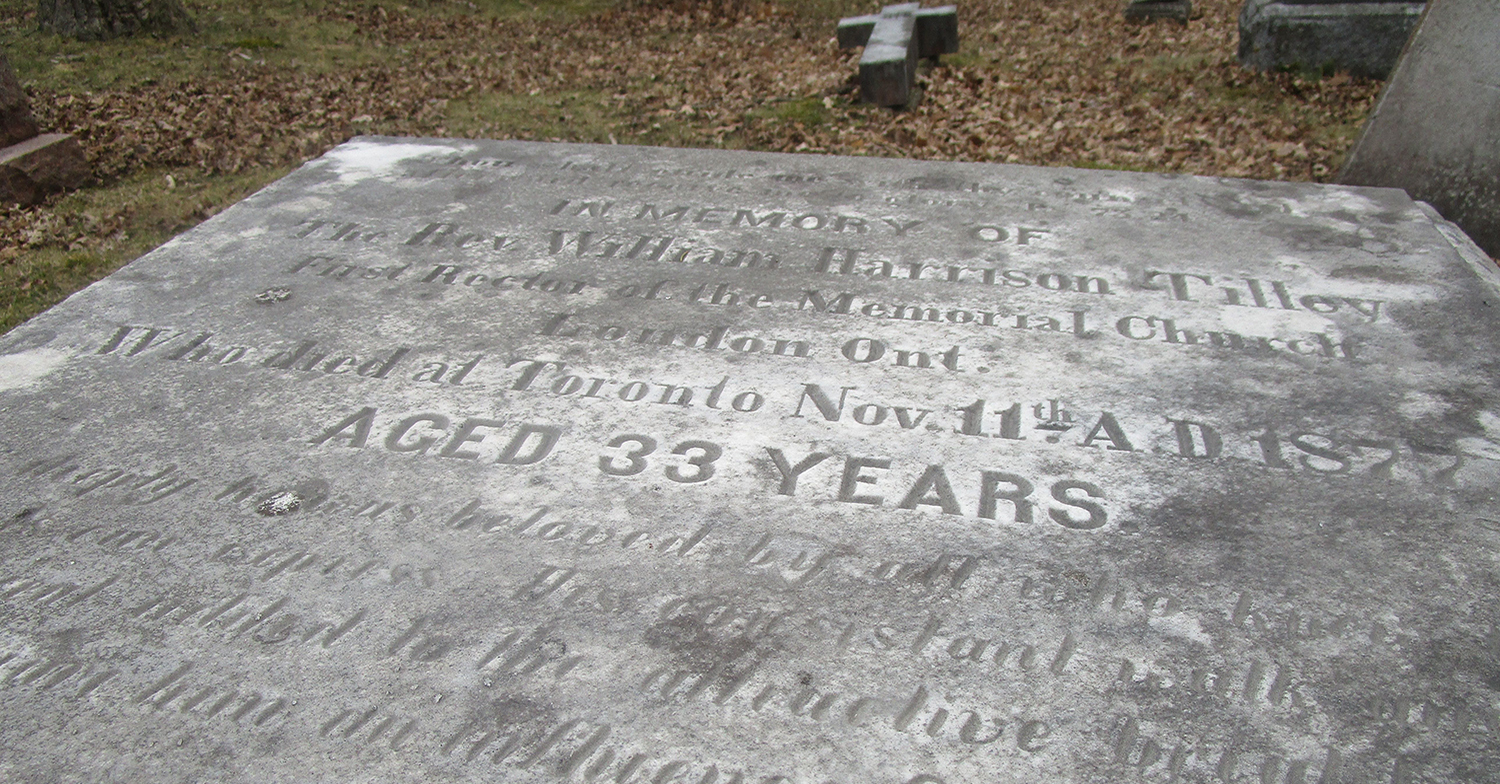 Surprising personalities and events — characters and circumstances , if you will — sometimes lie behind ordinary plaques or inscriptions. Distinguished ancestry, personal tragedy, community reputation, and the nature of congregational ministry may all be discovered.

One example is located in Bishop Cronyn Memorial Church in London. In the centre aisle near its west door stands the parish’s baptismal font. Constructed of grey stone in a plain style, it bears a simple inscribed plaque.

In Memoriam
Rev. W.H. Tilley, B.A.
A tribute of affection
From
The Sunday School

William Harrison Tilley (1844-77) was Cronyn Memorial’s first rector (1873-77), so it is not surprising that such a memorial to him stands in the church. There is, however, much more to his story. Born in New Brunswick, Tilley was the eldest son of Samuel Leonard Tilley, a Father of Confederation.

As his father dealt with these hectic political circumstances, Harrison Tilley completed his university education, graduating from the University of New Brunswick in 1864, followed by theological training at King’s College in Windsor, N.S.

Ordained deacon in 1867 and priested the following year, he served as curate in the parish of St. Luke’s, Portland, in St. John, N.B., under the guidance of the Rev. William Harrison, an old friend of his father’s for whom the younger Tilley was named.

Tilley’s four years of ministry in New Brunswick were marked by an energy and pastoral diligence that caught the attention of Isaac Hellmuth, the second bishop of Huron.

In 1871, Tilley came to London as assistant curate at St. Paul’s Cathedral. When the Memorial Church was constructed in 1873, its members asked the bishop to assign Tilley as their first rector. In his four years at Cronyn, Tilley gained a reputation for preaching and administration, but was especially admired for his work with children and young people, who developed a deep affection for him.

His success in London led to an appointment in 1877 as the chief assistant to the dean of Toronto at St. James Cathedral there. Tilley’s duties were extremely demanding, as Dean Grassett was in poor health. Preaching to a full church twice on Sundays, Tilley also participated in various community activities and supervised extensive pastoral outreach.

This overwork took a toll on his never-robust health. By the end of the summer, only months after his arrival, he was seriously ill. A trip home to New Brunswick failed to restore his energy. Returning to Toronto to be with his own family, he died there on Nov. 11, 1877. He was only 33.

Tilley’s funeral was held in London. Returning to the city on the Grand Trunk Railway, his body lay in state at Bishop Cronyn Church before the service was conducted there by Bishop Hellmuth. Several dignitaries took part, including Edward Blake, Bishop Cronyn’s son-in-law and the most controversial member of Prime Minister Alexander Mackenzie’s cabinet, and Rev. Dr. John Schulte, the subject of the first article in this series. Tilley was first buried in St. Paul’s cemetery on Rectory Street. When that cemetery closed shortly after his death, his grave was transferred to Woodland Cemetery, where his tombstone may still be seen.

Tilley’s wife Elizabeth and their three very young children were left without resources because of his untimely death. In a remarkable display of support, the people of Bishop Cronyn Church purchased a house for them on King Street, which became known as the Parish House. Elizabeth Tilley lived until 1918, continuing to play an active church role locally, provincially and nationally. Harrison Tilley’s all-too-brief career demonstrates the strong bonds of affection that developed between him and his congregation. That affection, in turn, resulted in sensitive pastoral care for his family.

Behind the straightforward words on Tilley’s memorial font lies a complex story of family and parish relationships. His energy provides a model and a warning about the nature of parish ministry. His congregation’s loving care for his family is also a model for us to emulate.

I am grateful to Dr. David Bellhouse of Western University and Bishop Cronyn Memorial Church who has had a long interest in Tilley’s career. Dr. Bellhouse shared his extensive files on Tilley for this article. My thanks go as well to John Lutman and the staff of our Diocesan Archives, whose assistance is always cheerfully and professionally given. Carolyn Lamont has been especially helpful in locating and reproducing photographic material.

(Photo: Rev. Tilley was first buried in St. Paul’s cemetery on Rectory Street. When that cemetery closed shortly after his death, his grave was transferred to Woodland Cemetery.)