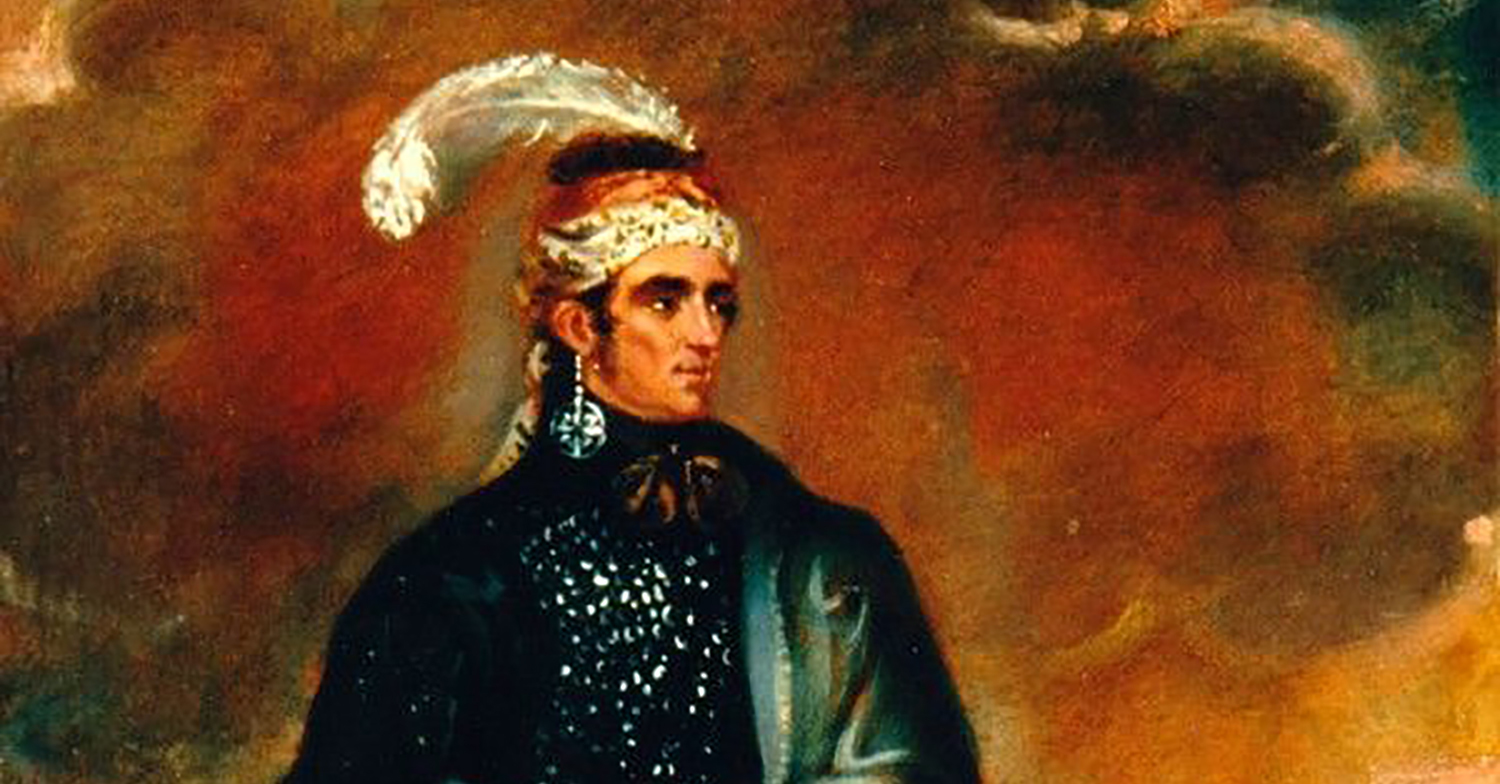 Located in Huron University College, the Archives of the Diocese of Huron house great treasures belonging to our extended church family.

Just inside the entrance is a glass case displaying several such items. On the bottom shelf is a small hardcover volume of humble appearance but of great historical importance, which is easily overlooked. A Mohawk translation of the Gospel of John, it is one of three surviving copies of the first book ever published by the British and Foreign Bible Society at its foundation in 1804.

The translator was John Norton, one of the most enigmatic and fascinating First Nations figures of the early nineteenth century. Born in Scotland probably in the later 1760’s to a Cherokee father and a Scottish mother, he spent most of his life in the Upper Canadian Grand River Mohawk community. Coming to North America in 1784 as an enlisted soldier in the 65th Regiment of Foot, Norton soon left military service and acted variously as a frontier schoolmaster, interpreter and trader in the area bounded by the lower Great Lakes.

The Mohawk leader Joseph Brant, heavily involved in establishing the Grand River community and negotiating its status with colonial officials, noticed the younger man and made use of his contacts and skills. Because his own son, John, was still a youngster, Brant groomed Norton for leadership, securing for him in 1799 the title Teyoninhokarawren, a non-hereditary chieftainship for diplomacy and war.

The two men were very close. As Joseph Brant aged, he designated John Norton as his “nephew”, a member of his family and his chosen successor. Norton was with Brant at his death in November 1807.

John Norton played an important role in the War of 1812 and in the politics of Upper Canada before his mysterious disappearance in the mid-1820s. His life mirrored the profound cultural changes taking place in the half-century following the American Revolution.

Modern historians of First Nations-settler relations have focused on these shifting identities in frontier situations. Richard White has described the Great Lakes basin from 1615 to 1815 as a middle ground in which a new society, neither European nor aboriginal but containing elements of both, was being formed. Other writers have rejected the idea of frontier altogether, using the term “borderlands” to describe these areas of changing group identities, blending customs, languages and cultures.

John Norton’s own ambiguous identity was a product of this middle ground. He was a citizen of these changing borderlands.

Norton’s rise to prominence made him the target of critics in the Grand River community and in the Upper Canadian Indian  Department, but it also led to extensive travels. He visited Geat Britain from 1804 to 1806 and again in 1815-1816. He made a trip to the southern United States in 1809-1810, visiting Cherokee towns in Georgia, Tennessee and Alabama and contacting members of his father’s family. While on his first visit to England, Norton was introduced to a group of prominent Christian evangelicals who were deeply involved in social reform. Consisting of Anglicans, members of the Society of Friends (commonly called Quakers) and others, it numbered William Wilberforce and Robert Barclay among its adherents. Pressing for the abolition of slavery, improvement in the situation of First Nations peoples and concerned to make the Bible available to all, this diverse group of reformers would be labelled the Clapham Sect by its cynical critics because of the location of many members’ homes within London. This group had formed the British and Foreign Bible Society just as Norton arrived in England and commissioned him to translate the fourth gospel into Mohawk.

Two thousand copies were printed, five hundred being sent with Norton on his voyage home. John Norton was profoundly affected by his contact with the Clapham Sect. Fired by their vision and energy, he returned to Grand River determined to better the lot of the Six Nations. His hopes were frustrated by those within the community who saw him as an agent of assimilation and by those in government who saw him as a threat to administrative authority. Joseph Brant’s death removed a powerful mentor.

The coming of war in June 1812 produced new challenges. While some in the Six Nations were reluctant to once again put their community at risk through military involvement, Norton led those who supported the anti-American cause. He played a key role in the victory at Queenston Heights in October and fought at several later engagements, including Lundy’s Lane in July 1814. Settling on a farm near Caledonia after the war, he remained there until his 1824 departure.

John Norton’s career demonstrates the complex nature of early development in the area now covered by the Diocese of Huron. His multi-layered life illustrates the complicated, yet subtle nuances of the early history of this region. The small, unassuming volume in the Archives gives us a direct connection to a complex man and time.

Rev. Douglas Leighton is the canon historian of the Diocese of Huron.

A Note on Sources