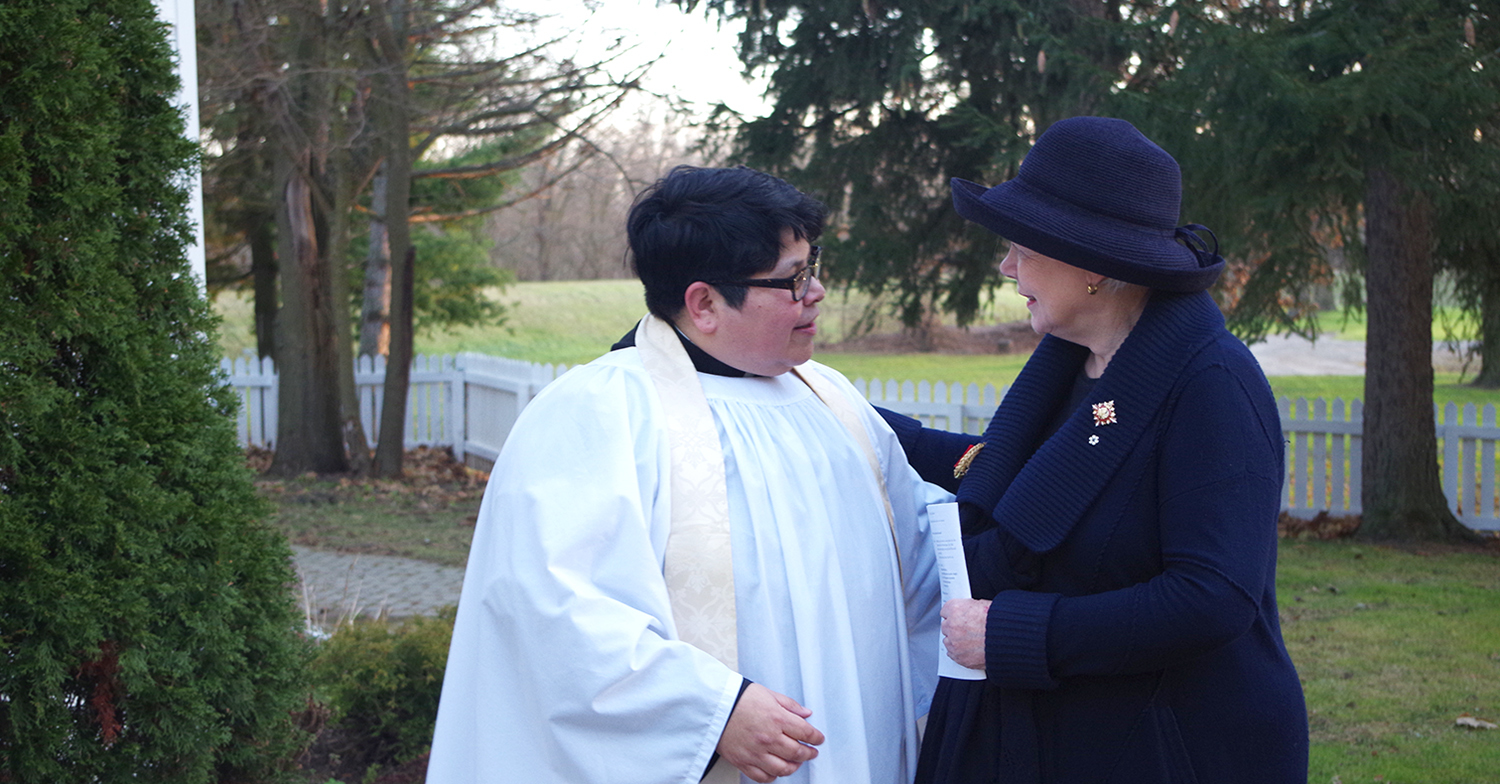 Ven. Rosalyn Elm with Hon. Elizabeth Dowdeswell, Lieutenant Governor of Ontario in front of  Her Majesty’s Royal Chapel of the Mohawks in 2017.

It is true there is hope in the midst sorrow and pain.  It is this hope that our Kingdom dreams are made of.

We have had a difficult 12 months and a difficult two years all around.  We are no longer the same; we are a different Diocese now, more than we ever were before.

Indigenous Anglicans in this Diocese are mourning. We can no longer deny the pain. The anger is different.  We are caught more than ever between who we are as spiritual people and a colonial church.

We are learning … feeling our way through a metanoia:

Over the past four years we have been making remarks on this stage:

This process is about our liberation. And our liberation cannot happen while we are being treated like a cultural spectacle. Our ways of being Anglican are the first ways of being Anglican on these lands. We are the original church of the Diocese of Huron, and our traditional interpretations and cultural symbols should stand alongside the settler church’s British aesthetics. It is about contextualizing the unique communities, not only for our Indigenous peoples, but for all of us.

We are at a crucial point in the life of the church and when we live in these crucial points of uncertainty, it is a little scary. But in this crucial time, we are bearing witness.

These past four years we have witnessed the stories of disrespect, of negligence, of indecisiveness. But this year was different: we together have witnessed so much … from re-evaluating our uniform and what it means as an outward symbol of service to those in our contexts … whether it was school chaplaincy, LGBTQ2+ hospital and long-term care chaplaincy, addictions care in the community, housing and living advocacy, environmental advocacy,  relief and refugee advocacy... and so much more.

So many of you have talked about this, stood up and been decisive about what this new commandment of “love one another” means... so simple yet so very powerful and lifechanging.  YOU DID THIS colleagues and friends. YOU DID THIS.

Huron Synod, May 16, 2022: Bishop Todd invited Ven. Rosalyn Kantlaht'ant Elm to add her voice to his charge to Synod - to give her own snapshot of the situation in which Indigenous communities in the diocese find themselves and to offer her vision for the road ahead.

Martin Luther King wrote a sermon in 1956 before his trial for violating anti-boycott laws in Alabama … He recounts a conversation with someone who suggested the bus boycott was destroying race relations and peace in the community, and responds: "Yes, it is true that if the Negro [accepts] his place, accepts exploitation, and injustice, there will be peace. But it would be an obnoxious peace.  The reference passage was Matthew 10:34-36, in which Jesus said: ‘Do not think that I have come to bring peace to the earth; I have not come to bring peace, but a sword.’

Certainly he is not saying that he comes not to bring peace in the higher sense. What he is saying is: “I come not to bring this peace of escapism, this peace that fails to confront the real issues of life, the peace that makes for stagnant complacency.” Then he says, I come to bring a sword—not a physical sword. Whenever I come, a conflict is precipitated between the old and the new, between justice and injustice, between the forces of light and the forces of darkness. “I come to declare war on evil. I come to declare war on injustice”

This text is saying in substance: Peace is not merely the absence of some negative force—war, tensions, confusion but it is the presence of some positive force—justice, goodwill, the power of the Kingdom of God.[1]

YOUR openness, YOUR ideas, YOUR service as the priesthood of believers are updating the church.  You must continue to take hold of that responsibility that this charge is illuminating. I am not going to give the same synod speech of the past because, if we pay attention, we can go beyond truth and reconciliation:

Shame is not a strategy …

Guilt is not plan …

Judgement does not belong to Indigenous peoples … nor do we want it.

We need to pay attention; because peace is not the absence of tension but the presence of justice.    All over this Diocese there are trajectories of Relationship and Responsibility, places and spaces where we have unpacked and unlearned old ways of knowing and grown towards the dream our ancestors held. Two nations, journeying together towards the great Kingdom of peace.

We are building that Kingdom here. We are the stones God seeks to create a foundation for generations to understand their identity as Christian, as Indigenous, as Canadian, as immigrant, as Anglican, as the Body of Christ working in the world, each part important and never the same.

2)      Indigenous Peoples of the Diocese of Huron:  (Video Projects)

3)      Facing the Challenge:  A Cartography of Justice and Learning.